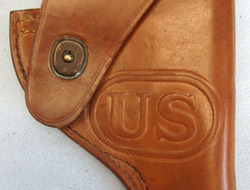 
A WW2 1943 dated 'Craighead' U.S. Smith & Wesson 'Victory' Model revolver holster. The Victory Model was used by United States forces during WW2, being chambered in the well-known and popular .38 Special cartridge. The Victory Model was a standard issue sidearm for United States Navy and Marine Corps aircrews, and was also used by security guards at factories and defence installations throughout the United States during the war. The holster is in excellent condition. It has the 'US' raised oval cartouche on the front. It has a fold over flap which secures with a 'Fix' press stud. It shows almost no signs of use. On the reverse it has a stitched and riveted belt loop which is marked with the 'Craighead' of Denver Trade mark stamp and "US 1943". This is a hard to find holster and in very good condition. The price includes Uk delivery. L 303
£195.00 ...Read full description
CategoryAccessories
SubcategoryCare & Storage
ConditionUsed
Price£ 195
Sale typeTrade
Manufactured Year1943
Your referenceL 303
Recommended UsageCollection item