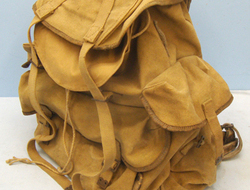 
An original and scarce WW2 1944 dated British Army Commando Bergen and frame. During WW2 the British Commando Bergen was a most sought after piece of kit as it could carry heavy loads very comfortable when on marches. Originally the Bergen was used by the British Commandos on operations in Norway and the French coast, but latter by troops in operation Overlord in Normandy 1944 and Operation Varsity in the crossing of the Rhine. This is a rare original British WW2 Commando 'D-Day' Bergen rucksack produced for the D-Day landings. Equipment worn by troops on D-Day differed considerably between the Commando Units involved (see page 79 of The World War II Tommy By Brayley & Ingram). This example is made of rugged canvas and is in great condition for its age. The rucksack when packed measures approximately 24" x 20" x 15" and is mounted on a steel frame for comfort when carrying. The back of the rucksack has it's original reinforced stitched leather anchor points where mounted to the frame and has a top large flap cover with webbing retaining straps and interior lined waterproof cover for additional waterproof protection. The top of the rucksack's body has brass rings stitched into the webbing for draw cord. The body of the rucksack has a central large flap covered equipment pocket and others on the left and right sides. The rucksack opens to reveal its waterproof lining which is intact and a separate dividing pocket. The rucksack and frame are complete with all of it's correct shoulder straps and buckle fasteners. The inside of the top cover is ink stamped with "B Ltd. 1944" and "194" along with the War Department Broad Arrow. This is a scarce and highly collectable piece of D-Day equipment. The price includes UK delivery. Misc 857
£275.00 ...Read full description
CategoryAccessories
SubcategoryOther Accessories
ConditionUsed
Price£ 275
Sale typeTrade
Manufactured Year1944
Your referenceMISC 857
Recommended UsageCollection item