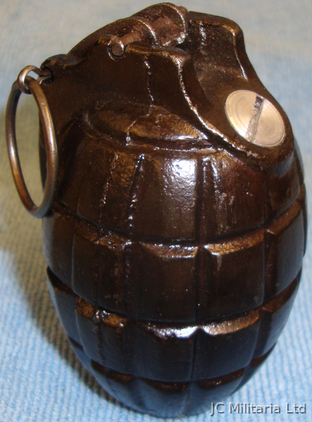 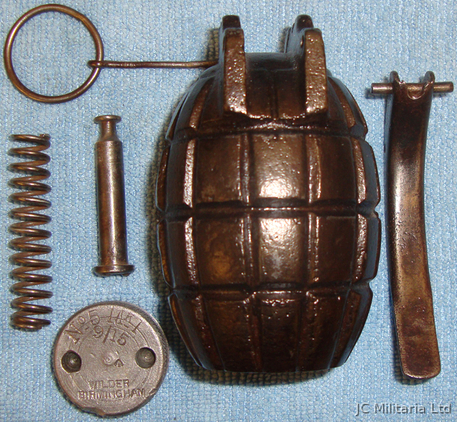 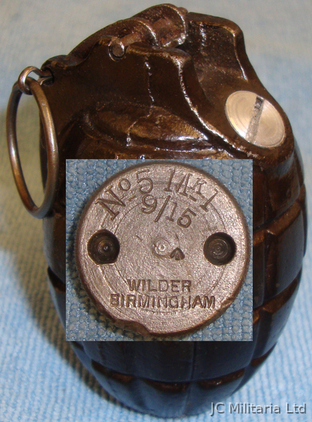 William Mills, a hand grenade designer from Sunderland, patented, developed and manufactured the “Mills bomb” at the Mills Munition Factory in Birmingham, England, in 1915. The Mills bomb was inspired by an earlier design by Belgian captain Leon Roland. Roland and Mills were later engaged in a patent lawsuit. The Mills bomb was adopted by the British Army as its standard hand grenade in 1915, and designated the No. 5. The Mills was a classic design; a grooved cast iron “pineapple” with a central striker held by a close hand lever and secured with a pin. According to Mills’s notes, the casing was grooved to make it easier to grip and not as an aid to fragmentation, and in practice it has been demonstrated that it does not shatter along the segmented lines. Stamped on the base plug: No5 MkI –Mills Patents – 9/15, and the makers ‘Wilder Birmingham’. The grenade has its original alloy filler plug, ring with pin, lever, striker and spring. The price for this Great War piece includes UK delivery. O 1639.