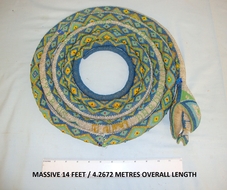 
WW1 Turkish / Ottoman Empire prisoners of war made many items whilst in captivity. It kept them occupied and was an avenue for them to earn money to supplement their rations and purchase items they required. Some prisoners even sent them home as gifts for family members or used them to barter with other prisoners. The Australian Memorial's collection of Ottoman prisoner beadwork includes snakes, lizards, bags, bookmarks and jewellery. All were handmade with small glass beads using either beaded crochet method or weaving on small looms. Crochet beaded snakes were the most popular of the beaded souvenirs created in the prisoner of war camps. Nearly half the Memorial's collection of beadwork items is made up of snakes. This is probably for two reasons, firstly a snake is basically a tube, a very easy shape to make with bead crochet. Secondly, snakes were a symbol of good luck in parts of South East Europe, so the prisoner of war snakes could have had a symbolic importance for their makers. The text on the belly usually says ‘TURKISH PRISONER’. However this does not mean that all the prisoners who made the items were ethnically Turkish. The Ottoman Empire stretched from the Balkans to the Sinai. This means that the makers could have been Turkish, Kurdish, Arab, Greek, or Eastern European. This massive hand made WW1 Turkish / Ottoman Prisoner Of War Beaded Snake measures a massive 14 feet overall length and is decorated with colourful beads in typical snake skin diamond back design. The belly of the snake has beaded script ‘Turkish Prisoners Ypres, Dardanelles’ and other indistinct lettering and or numbers (illustrated). It has the correct snake’s head with typical forked tongue. The body has over its lifetime had a few small repairs but these are only visible on close inspection. The price includes UK delivery. Sn 18346
£795.00 ...Read full description
CategoryAccessories
SubcategoryAntiques & Militaria
ConditionUsed
Price£ 795
Sale typeTrade
Manufactured Year1914 to 1918
Antiqueyes
Your referencesn 18346