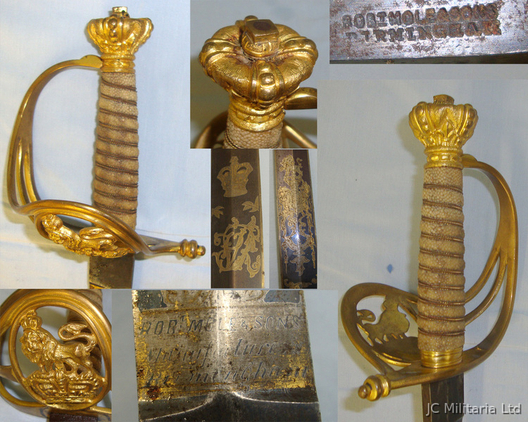 Robert Mole and Sons of Birmingham (1835-1920) supplied swords and bayonets to the War Office, the Admiralty and the Government of India as well as for private and trade customers. This is an unknown Victorian pattern of sword made by Mole & Sons. The high quality & form of the sword would indicate that it may have been carried by a Court or Parliament Guards Officer. It has a 31 ¼” blade with gilt panels on a field of blue that ends in a maltese cross in the mid section of the blade (36 ¼” overall). The gilt panels feature Crown VR (Victoria Regina) foliate devices and heraldic arms. The ricasso and spine of the blade are signed by the maker ‘Robt Mole & Sons Birmingham’. One side of the blade shank has a small inspection proof mark similar to marks seen on military issue swords and bayonets (illustrated). The gilt 3 bar guard incorporates a crown with crowned Lion device. The hilt has an ornate Crown pommel the fish skin grip is wire bound. The sword is without scabbard. An excellent, quality made sword worthy of further research. The price includes UK delivery. ED 2539