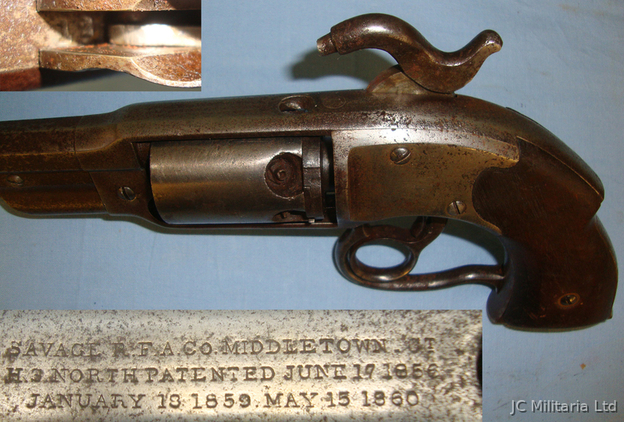 This is a rare original American Civil War Savage Navy First Model Savage 6 shot double action revolver. The revolver manufactured by the Savage Revolving Fire-Arms Co. of Middletown, Connecticut from 1861-1865, the total production being approximately 22,000 guns. This revolver features a unique heart shaped trigger guard with round cocking lever, off-set hammer, six-shot cylinder, 7” octagonal rifled barrel and hinged loading lever (14 ¾” overall) . The Savage Navy had a unique way of cocking and firing the gun. The gun is cocked by using your middle finger to draw back the ring hammer lever to cock the hammer and rotate the cylinder. The lever is then released forward and the separate trigger is pulled to fire the gun. The Savage Navy revolvers were used by both Union & Confederate Officers during the Civil War. The bore of the rifled barrel has light staining consistent with age and use. The barrel is absent its conical brass post foresight. The underside of the barrel is numbered ‘12’. Its original Walnut grip has nibbles to the edges in places but is totally secure. The action is crisp. The pistol’s metal work in the white has even patina & the top of the frame has faint manufacturer & patent detail (illustrated). The price for this rare savage pistol includes UK delivery. NB As an antique percussion pistol no licence is required to own this item in the UK if retained as part of a collection or display. Sn 18834