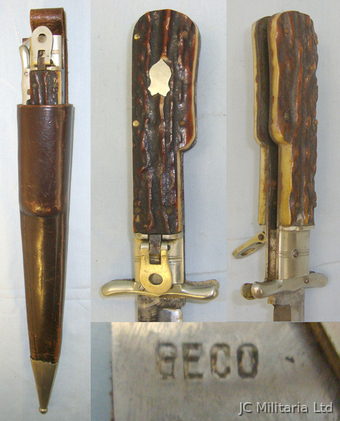 The German company Genschow & Co emerged from the Badische detonator, primer and ammunition factory Ernst Schreiner founded in 1898 by ammunition manufacturer Ernst Schreiner , who sold the company to Gustav Genschow in 1903. Genschow put this together with the Badische Schrot- und Gewehrpfropfenfabrik GmbH from Durlach . The Badische Munitionsfabrik GmbH emerged from the two companies , which was incorporated into Gustav Genschow & Co (GECO) in 1906 . The Company’s registered office was in Berlin. During the First World War , the company expanded, the workforce grew from 178 to around 700 employees. Due to the greatly reduced demand after the war, Genschow was able to keep afloat with the manufacture of hunting weapons as well as hunting and sports ammunition. It was only with the beginning of remilitarization by the National Socialists and the outbreak of the Second World War that the entrepreneurial boom succeeded and GECO was able to grow into an important armaments company. This is an excellent extra large folding Bowie Knife by Geco. It is 12 ¾” overall length when folded & in its original leather open top scabbard. The knife's 10 ¼” blade is undamaged and has just light areas of staining consistent with age. The blade is crisply marked on one side with the manufacturer’s trademark ‘Geco’. It has attractive thick Stag Antler scales which are in great condition secured by brass pins. It has German Silver bolsters. One bolster has a hinged release lever for opening and closing the blade. When fully extended the knife measures 15” overall. One scale is mounted with a void German Silver shield. The knife is complete with original open top brown leather scabbard which has an integral single leather belt loop stitched to the rear of the throat. It has a German Silver chape with ball end. All leather & stitching of the scabbard are clean & intact. The price for this impressive folding Bowie includes UK Delivery. Sn 18927