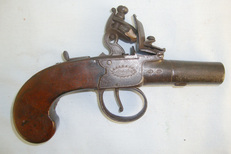 
Thomas and John Rea are recorded at 91 Minories London between 1810 and 1822. They were Contractors to the East India Company between 1814 and 1822. This a good flintlock pocket pistol made By Rea of London. It is 6 ¼” overall with a 1 ½” screw off barrel (a tool is required to turn off the barrel. We do not have the tool). The barrel’s smooth bore has staining & residue consistent with age and use. The action and barrel have crisp proofs. Its action is decorated on both sides. One side with Martial banners & arms and signed by the maker ‘Rea’. The reverse has ‘London’ within a foliate edged oval panel. The action has a sliding safety bolt to the rear of the Swan neck hammer which is fitted with flint. The bolt works as it should. It has its original bag shaped wood grip which has an inlaid void white metal shield escutcheon. The trigger guard is decorated with a stylised star motif. The weapon cocks and dry fires crisply. The price includes UK delivery. NB As an antique flintlock weapon no licence is required to own this item in the UK if retained as part of a private collection or display. **This item is from the life time military collection that belonged to Captain Allan Marshall. Marshall was a Captain with the Royal Regiment of Fusiliers and on retirement went onto be a respected local huntsman, historian and nature expert, writing for the Rochdale Observer for over 40 years. With his love of history he amassed a collection of historical, military arms and armour related items and was known for his noted collection of Lancashire Fusillers Insignia. On his death in 2012 his collection was passed to his son Mr Jeremy Marshall who also took over the family business ‘Towers of Rochdale’ which was established in the early 1900s and sold guns and country pursuit items. Jeremy was a prominent figure in the firearms industry and adviser to some government and business agencies but sadly passed away in November 2020. He had continued adding to his late father’s military collection with some quite unique items**Sn 18637
£575.00...Read full description
CategoryPistol / Hand Guns
SubcategoryMuzzleloader
ConditionUsed
Price£ 575
Sale typeTrade
Make1810 - 1822 English Thomas & John Rea London
Calibre.54
Model54 Bore Flintlock Pocket Pistol With Turn Off Barrel.
Manufactured Year1810 - 1822
Antiqueyes
MechanismFlintlock
Your referencesn 18637
Gun StatusActivated
Recommended UsageCollection item