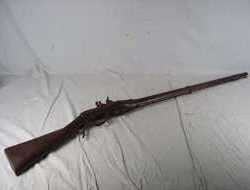 
This is an early piece, most examples come from the 1830's and a lot were later converted to percussion cap.

The top plate is stamped :-

The rifle cocks and releases smoothly, as does the breech loading mechanism. It has its original ramrod.

It is in decent condition, the woodwork is free from any major splits or chips.

The metal work is very decent, although the rear band is a little dented on the forward edge and the flint screw is rather worn.

Much of the original arsenal browning remains.

Postage is £20 or the rifle can be picked up from our shop in Portsmouth Historic Dockyard.

The M1819 Hall rifle was a single-shot breech loading rifle designed by John Harris Hall, patented on May 21, 1811, and adopted by the U.S. Army in 1819. It was preceded by the Harpers Ferry Model 1803. It used a pivoting chamber breech design and was made with either flint-lock or percussion cap ignition systems. The main years of production were from the 1820s to the 1830s at the Harpers Ferry Arsenal. This was the first breech loading rifle to be adopted in large numbers by any nation's army, but not the first breech loading military rifle - the Ferguson rifle was used briefly by the British Army in the American Revolutionary War. Breech loading rifles remained overshadowed by common muskets and muzzle loading rifles so prevalent in the early 19th century....Read full description
CategoryRifles
SubcategoryMuzzleloader
ConditionUsed
Price£ 3,750
Sale typeTrade
Make1819 Extremely Rare J. H. Hall Model 1st 1819 Harpers Ferry Breech Loading Flint
Antiqueyes
MechanismBreech Loading
CertificateNo Licence
Gun StatusActivated
Recommended UsageCollection item

In our community section
More about this: What is the best airgun calibre?