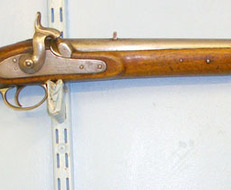 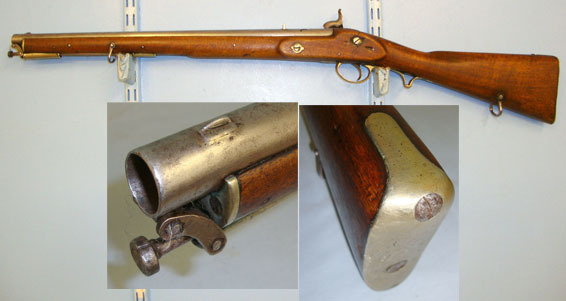 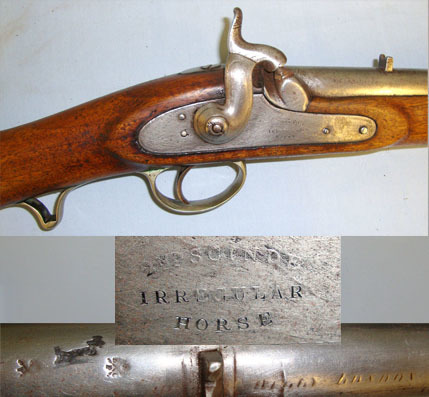 The Scinde Irregular Horse was raised at Hyderabad on 8 August 1838. It was named after the province of Sind now in Pakistan, where it was raised to protect the trade route from the Bolan Pass to Sukkur on the Indus River and fight against the marauding Baluchi warriors. It later expanded to the 1st, 2nd and 3rd Scinde Horse. These three regiments were absorbed into the regular forces after the Mutiny of 1857 and became the 35th Scinde Horse and the 36th Jacob's Horse. They saw active service in Northern and Central India, Persia, Afghanistan on the North West Frontier and, during World War I, where they served in France and Palestine. The two regiments were amalgamated in 1922, as the present 14th Prince of Wales's Own Scinde Horse which served in World War II. This is an original Enfield Pattern private purchase cavalry carbine marked to the 2nd Scinde Irregular Horse. Its original wood full stock is undamaged and metal work has even patina. It has a heavy military percussion hammer and the action plate is marked ‘2nd Scinde Irregular Horse’. Its 21" barrel (37” overall) has a smooth bore which has just light staining consistent with age. The top of the barrel is stamped with Victorian proof/inspection marks and with an indistinct ‘London’ maker or retailer mark. It has a fixed rear sight and blade fore sight. It has an under barrel captive swivel steel ramrod. The carbine also has brass fore end block, trigger guard & butt plate. It is complete with sling swivels. It cocks & dry fires perfectly. The price includes UK delivery. NB As an antique percussion Carbine no licence is required to own this item in the UK if retained as part of a collection or display. Sn 15941

In our community section
More about this: What are PCP Air Rifles? Surplus Store UK