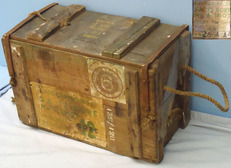 
Rare WW2 1944 dated 12 bore, No. 6 shot ammunition empty wooden boxes originally containing 400 rounds. This is an empty wooden ammunition box used for holding 400 12 bore cartridges for issue to 12 bore shotguns. The probable issue was to RAF Air Gunners for clay pigeon training to keep their eye in for air to air shooting against enemy aircraft. The clay pigeons helping the shooter to use lead in shooting. There are various labels and stencils on the box as to the contents and one is dated 26.4.44 (26th April 1944). The labels and stencils are shown in the photographs. The box has a RAF blue diagonal stripe on boths end of the box and is complete with the closure pin for keeping the lid secure. The box has two rope handles at each end of the box, one of which is snapped. These boxes were made disposable, i.e. making fires for keeping warm or cooking, making sand reinforced positions or just for sitting on. The survival rate of these boxes is very small. The price includes U.K. delivery. O 1487
£275.00 ...Read full description
CategoryAccessories
SubcategoryAntiques & Militaria
ConditionUsed
Price£ 275
Sale typeTrade
Manufactured YearWW2 1944 Dated
Your referenceO 1487
Recommended UsageCollection item