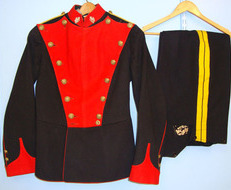 
The 5th Royal Irish Lancers was a Cavalry Regiment of the British Army. It saw service for three Centuries, including the First World War and the Second World War. It amalgamated with the 16th The Queen's Lancers to become the 16th/5th Lancers in 1922. The Regiment was originally formed in 1689 by Brigadier James Wynne as James Wynne's Regiment of Dragoons. It fought at the Battle of the Boyne in July 1690 and at the Battle of Aughrim later that month under King William III. Renamed the Royal Dragoons of Ireland in 1704, it went on to fight under the Duke of Marlborough at the Battle of Blenheim in August 1404 during the War of the Spanish Succession. At the Battle of Ramillies in May 1606 the regiment helped capture the entire French “Regiment du Roi”, after which it fought at the Battle of Oudenarde in July 1708 and at the Battle of Malplaquet in September 1709. In 1751, it was retitled 5th Regiment of Dragoons and in 1756 it became the 5th (or Royal Irish) Regiment of Dragoons. As such, it served in Ireland and had the honour of leading the charge against the rebels at the Battle of Enniscorthy in May 1798 during the Irish Rebellion of 1798. However, its troops were accused of treachery, their accusers claimed their ranks had been infiltrated by rebels. Following an investigation, it was found that a single individual, James M’Nassar, had infiltrated the Regiment, he was ordered to be "transported beyond the seas”. The circumstance was commemorated in a curious way. It was ordered that the 5th Royal Irish Light Dragoons should be erased from the records of the army list, in which a blank between the 4th and 6th Dragoons should remain forever, as a memorial of disgrace. For upward of half a century this gap remained in the army list. The Regiment was reformed in 1858, keeping its old number and title, but losing precedence, being ranked after the 17th Lancers. It was immediately converted into a Lancer Regiment and titled 5th (or Royal Irish) Regiment of Dragoons (Lancers). In 1861, it was renamed the 5th (or Royal Irish) Lancers and then the 5th (Royal Irish) Lancers. The Regiment saw action in India and the Second Boer War. At the outbreak of WW1 The Regiment became part of the British Expeditionary Force, sailing from Dublin to France as part of the 3rd Cavalry Brigade in the 2nd Cavalry Division in August 1914 for service on the Western Front. The 5th (Royal Irish) Lancers also has the grim honour of being the Regiment of the last British soldier to die in the Great War. This was Private George Edwin Ellison from Leeds, who was killed by a sniper as the Regiment advanced into Mons a short time before the armistice came into effect. The Regiment was renamed 5th Royal Irish Lancers and disbanded in 1921, but a squadron was reconstituted in 1922 and immediately amalgamated with the 16th The Queen's Lancers to become the 16th/5th Lancers. This is an excellent uniform tunic and trousers of the 5th Royal Irish Lancers. The blue tunic has scarlet breast, cuffs, high collar with hooks and white metal Kings Crown with Harp Regiment badges. The tunic has piping to the sleeves, back and bottom edge of the tunic. The tunic has the correct post 1902 King’s Crown ‘Fifth Royal Irish’, Harp and Crossed Lances Regimental embossed buttons. The back of the buttons are stamped by the manufacturer ‘Smith & Wright Ltd Birmingham’. The epaulettes are braided yellow cord with matching KC Regiment buttons. The pleated and vented rear of the tunic has the same KC Regiment buttons. The body of the Tunic and lining are clean and undamaged. The inside of the tunic has a perished paper label with ink date that appears to be ‘Nov 1912’ none of the manufacturer or size detail is legible. The lining also has WD with arrow ink stams together with ‘Property Of The Aldershot Tattoo’ & ‘Property Of The SSAFA’. The Tunic is small approx UK size 34" chest. The blue Cavalry trousers have yellow tape to the legs, raised waistband, buttoned fly and vented ankles with buttons. All buttons are present. The inside of each leg have correct reinforced panels to protect the Lancer when riding. They are small approx UK size waist 28", inside leg 26". All material is clean & undamaged. The trousers have a perished illegible paper label which can be seen in image 1and is not damage to the trousers. The high waistband lining has a WD arrow ink stamp. The price for this colourful Lancer’s Uniform includes UK delivery. Sn 15703:10
£995.00 ...Read full description
CategoryAccessories
SubcategoryClothing
ConditionUsed
Price£ 995
Sale typeTrade
Manufactured YearPre WW1
Your reference15703:10
Recommended UsageCollection item