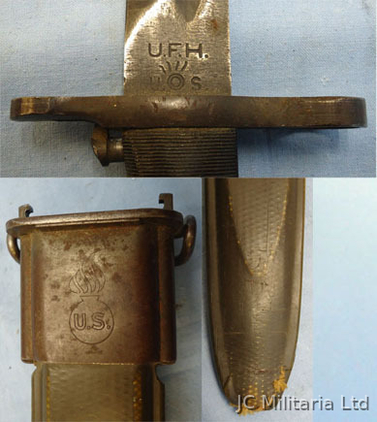 
This is a nice M1 bayonet that has been cut down from a M1905/M1942 bayonet. This occurred from August 1942 when it was discovered that the M1925 and M1942 bayonets were too long, especially for jungle fighting. The first bayonets merely had cut down blades which are readily identifiable by the fullers which run down to the point. Later bayonets had a new blade with standard fullers. This example has a cut down blade marked to the ricasso with A.F.H. (Union Fork and Hoe Company of Geneva, Ohio) U.S. and a Flaming Grenade (Frankford Arsenal). The scabbard is a standard M3green plastic with a metal throat stamped with U.S. within a flaming grenade. The tip has light wear damage caused by service use. See An Illustrated History of Bayonets by Martin J. Brayley, pages 230 and 242. The price includes UK delivery. BAYO 282
£225.00...Read full description
CategoryBlades
SubcategoryBayonets
ConditionUsed
Price£ 225
Sale typeTrade
MakeA.F.H. (Union Fork and Hoe Company of Geneva, Ohio) U.S.
Manufactured YearWW 2
Your referenceBAYO 282