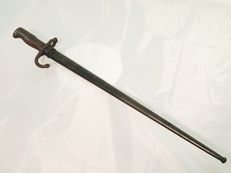 
The Fusil Modèle 1874 or Gras was the French Army's primary service rifle from 1874 to 1886. Designed by Colonel Basile Gras, the Gras was a metallic cartridge adaptation of the single-shot, breech-loading, black powder Chassepot rifle. It was developed from 1872 to 1874 as a response to the German adoption of the Mauser Model 1871 metallic cartridge rifle.

Our example comes with its matching numbers scabbard. The serial number ‘58921’ is stamped both on the scabbard’s ring and on the bayonet’s cross guard.

As seen in the pictures the guard is also marked with a number of factory stamps.

The edge of the blade is marked with St Etiene’s factory mark and manufacturing year 1876.

The piece is in very good condition with negligent signs of usage.

UK postage is £18 or it can be collected from our Portsmouth Shop.