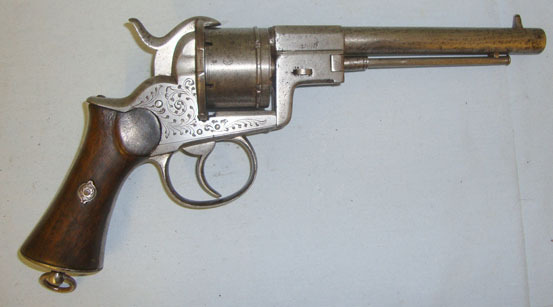 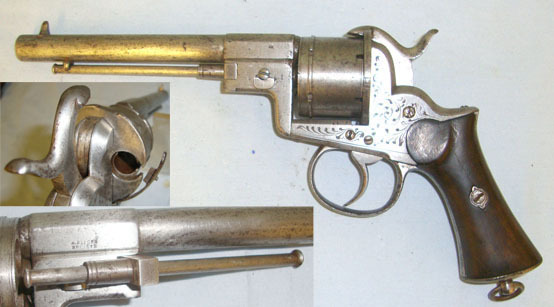 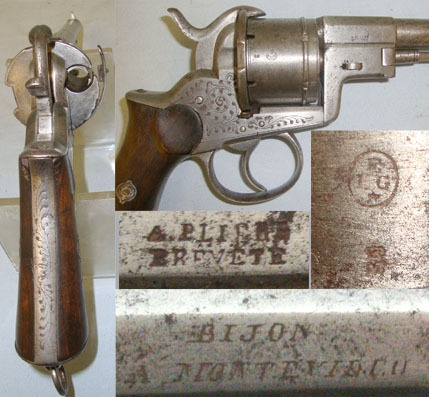 
Adrien Pliers was a Liege gunmaker who received at least 6 different firearms patents between 1855 and 1866. This is a Belgian Liege 6 shot 12mm single action pin fire revolver with unusual loading mechanism & captive ejector rod by Adrien Pliers. The unusual ejector rod is clipped beneath the barrel, which hinges outwards and then slides in the conventional manner. The loading system is also most unusual, consisting of a revolving disc behind the cylinder with a single aperture which when at half cock is aligned with a chamber allows the cartridge to be inserted, (we have not seen this type of mechanism before). The revolver has a 6 ¼”, 2 stage barrel and measures 12” overall. The barrel has a triangular post fore sight and the rear sight consists of a notch in the hammer. Its rifled bore has staining and residue consistent with age and use. The cylinder has Liege proofs. The metal work in the white has panels of engraved foliate decoration on the action frame. The breech is stamped “A.PLIERS BREVETE” & engraved “BIJON S MONTE-VIDEO”, The walnut grips are undamaged. The butt has military lanyard ring. The weapon’s cocking and firing actions work correctly in single action. The price for this unusual revolver worthy of further research includes UK delivery. NB As an obsolete calibre, antique, pin fire weapon no licence is required to own this item in the UK if retained as a part of a collection or display. Sn 18077:1
£895.00...Read full description
CategoryPistol / Hand Guns
SubcategoryRevolver
ConditionUsed
Price£ 895
Sale typeTrade
MakeA.PLIERS BREVETE” & engraved “BIJON S MONTE-VIDEO”
Calibre12 mm
ModelUNUSUAL LOADING MECHANISM & EJECTOR ROD**C1855-1866 A.PLIERS BREVETE Liege Proof
Manufactured Yearc.1855-1866
Antiqueyes
MechanismPinfire
CertificateNo Licence
Your reference18077:1
Gun StatusActivated
Recommended UsageCollection item