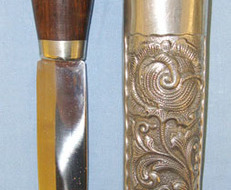 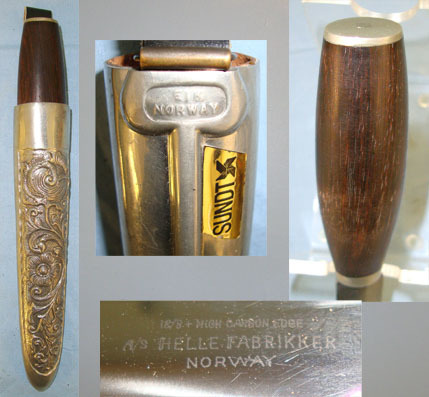 A/S Helle Fabrikker was established in the early 1930’s in response to hard times and the depression. The unemployed Brothers Steinar and Sigmund Helle started making farming tools and other implements in the forge of their Father’s farm. In 1932 they started making small sheath-knives which quickly became popular locally. Thus, the foundations of an important business in a typically Western-Norwegian rural area were laid. Cutlery became their main product in the 1940’s and since the mid 1970’s, to date the company has produced quality sports knives and forged knives for silver cutlery. This Hunting / Fishing knife was made C1970’s by A/S Helle. It has a sharp, clean 4 ¼” polished steel drop point blade. The blade is marked by the manufacturer ‘18/8+ High Carbon Edge A/S Helle Fabrikker Norway’ . The knife has an undamaged solid bulbous wood handle. The hilt has a German silver ferrule and flat pommel cap. The knife comes with its original open top, German silver scabbard which has an ornate embossed foliate panel on the front aspect. The rear has a ridged seam and is marked near to the throat ‘EIK Norway’ and there are remnants of an adhesive label which can be seen in image 2. The throat mount has an integral black leather belt loop. The scabbard has no dents. The price includes UK delivery. Sn 15908:3