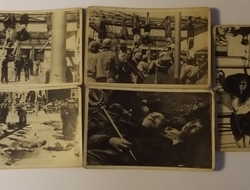 
This is a fascinating set of printed photos depicting the aftermath of the execution of Mussolini, his mistress and several leading fascists.

Mussolini and his mistress, Claretta Petacci, were captured on 27 April 1945 by local partisans near the village of Dongo on Lake Como. Mussolini and Petacci were shot the following afternoon. After the execution, the bodies of Mussolini and Petacci were taken to Milan and left in the town square of Piazzale Loreto, for a large angry crowd to insult and physically abuse. They were then, along with several other leading fascists, hung upside down from a metal girder above a service station on the square for the crowd to see.

The pictures were sold in Italy at the time of their deaths.

They were purchased of a lady of Italian descent whose father, a soldier, Giovanna Gramagla was present at the event.

They all have ’28-April 1945’ written lightly in pencil to the reverse.

The photographs are in very good condition for their age with minimal wear, although two of them do have a little creasing.

UK postage is £12, international at cost and it can be viewed in our shop....Read full description
CategoryAccessories
SubcategoryOther Accessories
ConditionUsed
Price£ 120
Sale typeTrade
Your referenceASF0X44M4FF6
Recommended UsageCollection item

In our community section
More about this: The 2019 British Shooting Show
Display map