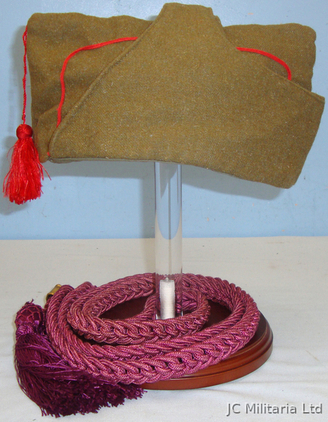 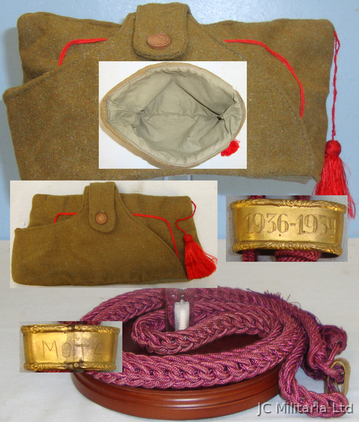 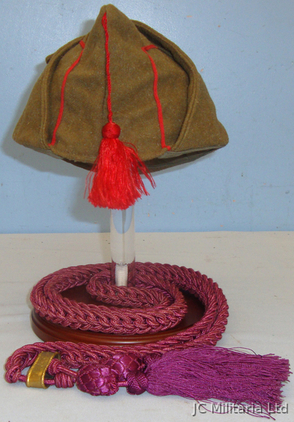 This is a Spanish garrison ( Gorrillo de Tropa ) cap made according to the Uniform Regulations of 1943. Based on the Foreign Legion's Isabelino cap, this one is made with wool, a cotton liner, and wood buttons, one is used to button the flaps above the head, the other under the chin. In 1933 the 2nd Republic regulated the use of the barracks cap. During the civil war, the barracks cap was used in both armies, and afterwards the Regulation of 1943 maintained it and added the fold-up earflaps. This is a small sized Spanish garrison cap, model 1943. The exterior circumference is approximately 62 cm. it is an Isabelino field cap used by the Spanish Foreign Legion and then later by the Army into the Spanish Civil War and perhaps later. Made with wool, with red cloth piping and a brown wooden button to hold the flaps on the right side. A red tassel is attached to the front. There is no date stamp, but a number 6 is hand written inside possibly denoting the size? Condition is excellent. The cap comes with a silk/cotton plaited plumb coloured lanyard with balls and tassels held together with a gold coloured ring with the dates ‘1936-1939’ stamped to it. The cap and lanyard come with an attractive wooden based stand. The price includes U.K. delivery. HE 832.