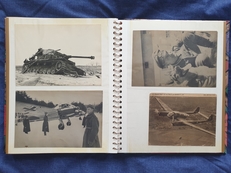 Amongst the pieces of this collection one is very interesting, depicting Generalmajor Carl-Alfred (August) Schumacher, in the picture with the rank of Oberstleutnant, after receiving his Knight's Cross of the Iron Cross on 21 July 1940.

Schumacher initially fought in World War I as an artillerist before he transferred to the Kaiserliche Marine and participated in the Battle of Jutland as a Fähnrich on a battlecruiser. He learned to fly in 1930 and transferred to the newly emerging Luftwaffe in 1934, involved in the flight- and leader-training departments. On 1 August 1936 he was given a squadron command in I./JG 136, he was subsequently promoted to major, and full command of the I./JG 136 — Gruppe (subsequently renamed II./JG 333 on 1 November 1938, and again on 1 May 1939 to II./Jagdgeschwader 77) based on the northern coast, the German Bight.

Following the German invasion of Poland in September 1939, Schumacher was appointed Jagdfliegerführer Deutsche Bucht (Jafü Deutsche Bucht—Fighter-commander German Bight) in October, to control all the disparate fighter units stationed on the northern coast. In November he was then given orders to set up a brand new Geschwader. Initially (and unusually) comprising just a Stab or HQ Flight, called Stab./JG Nord, it was soon officially authorised as JG 1 on 30 November 1939, with Schumacher as its first wing commander. It inherited command of I./JG 1 which had been previously operating without an HQ, and was also based at Jever on the northwest coast.

For his outstanding leadership and success he was the very first fighter pilot awarded the Knight's Cross - on 21 July 1940.

The dimensions of the album are 29 cm tall by 25 cm wide.

UK postage is £12 or it can be collected in person from our shop.

For international postage please contact us via the messaging service and we will post tracked at cost....Read full description
CategoryAccessories
SubcategoryOther Accessories
ConditionUsed
Price£ 150
Sale typeTrade