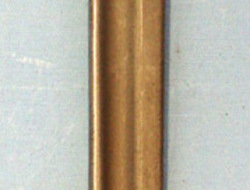 
Indian Pattern No 1 MK I* Siamese contract 1907 bayonet supplied in 1920 by BSA. A total of 10,000 rifles and bayonets were issued and the bayonets were merely ex-service model re-finished and marked with the Siamese 'Wild Tiger' Corps Emblem. (see page 349 item 154 in Skennerton's 'British & Commonwealth Bayonets' book). This was later converted by the Rifle Factory Ishapore (R.F.I.) by shortening the blade and grinding a false edge tip. This bayonet was then re-issued in 1963 for drill purposes. The bayonet has a fullered 12" long blade. It has slab grips secured by two screw bolts which have a white painted band around them. The pommel has a push button release and clearance hole, it has "L3" stamped into it on one side. The crossguard is straight. The ricasso is stamped on one side with "DP63" (Drill Purposes) and with The Siamese 'Wild Tiger' Corps Emblem and "MKI ** RFI" on the other. The bayonet has no scabbard but it is still an interesting piece. The price includes UK delivery. 10880:37
£145.00 ...Read full description
CategoryBlades
SubcategoryBayonets
ConditionUsed
Price£ 145
Sale typeTrade
MakeB.S.A,
Manufactured Year1920s
Your reference10880:37
Recommended UsageCollection item