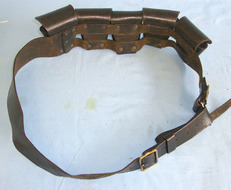 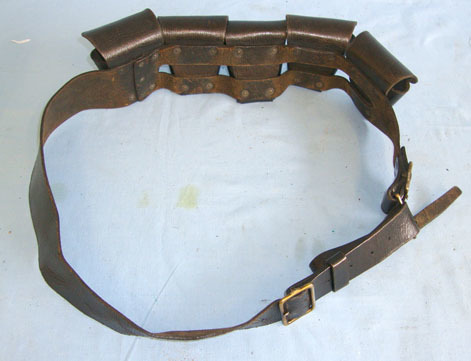 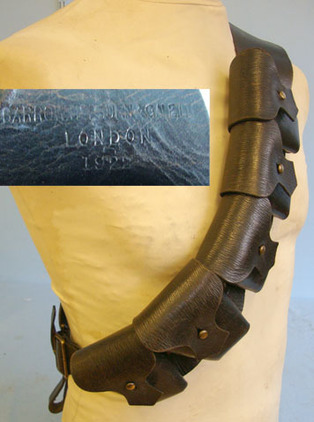 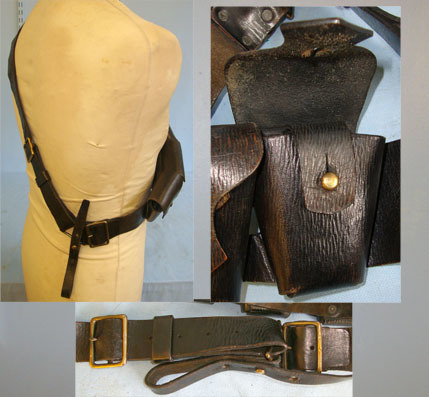 
The armed Royal Irish Constabulary (RIC) was Ireland's major police force from the early nineteenth century until the partition of Ireland in 1922. The loyalty of the Irish Constabulary during the outbreak of the 1867 'Republican Rising' was rewarded by Queen Victoria who granted the force the prefix 'Royal' in 1867. This original ammunition bandolier is made of Very dark Brown / Black leather. This colour of Bandolier formed part of the mounted RIC uniform & equipment. The bandolier has the correct 5 individual ammunition carrier pouches with full flap covers capable of carrying 50x .303 calibre rounds in total (10 in each pouch). Each carrier has heavy rivets and stitching together with a single brass stud to secure the flap covers and an inner strap on each pouch. The bandolier is fitted with its original heavy duty brass buckles and has an additional original belt stap with eyelets and brass stud to attach to waist belt. The leather is impressed with 1922 date together with manufacturer detail Barrow Hepburn & Co Ltd London (illustrated inset in image 1). All leather rivets and stitching are present & intact. The price includes UK delivery. Sn 15597
£225.00 ...Read full description
CategoryAccessories
SubcategoryAntiques & Militaria
ConditionUsed
Price£ 225
Sale typeTrade
Manufactured Year1922
Your reference15597
Recommended UsageCollection item