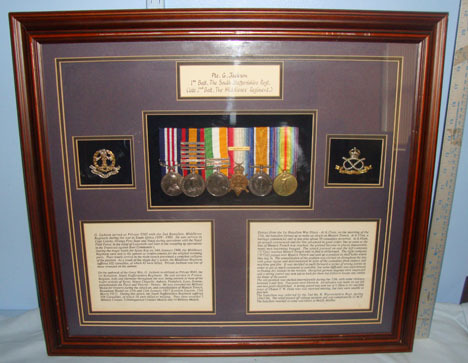 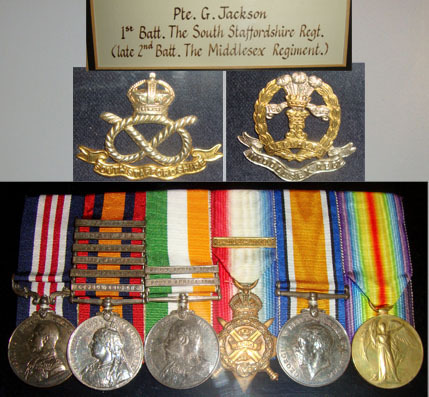 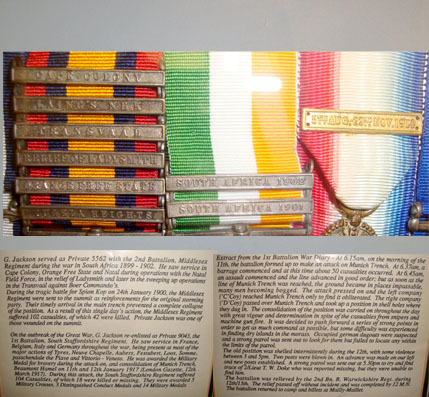 Private 5562 Jackson served with the 2nd Battalion Middlesex Regiment 1899-1902. He saw service in Major actions of the Boer Wars and was wounded in action at the battle of Spion Kop 24th January 1900 whist fighting at the summit. His Regiment lost 42 killed in action and suffered 102 casualties at Spion Kop in just one days’ action. He recovered from his injuries and at the outbreak of WW1 relisted as Private 9043 in the 1st Battalion The South Staffordshire Regiment. Pte Jackson saw much action in many of the major engagements and theatres of the Great War and was awarded the Military Medal for his bravery during the attack of Munich Trench, Beaumont Hamel 11th & 12th January 1917 (London Gazette 12th March 1917). This is the Soldier’s original framed Military Medal group with ribbons and bars together with South Staffordshire & Middlesex Regiment Bi-metal cap badges. There are also card inserts with hand written text detailing the Soldier’s service in both the Boer War & WW1 together with circumstances surrounding the award of his MM and an extract from the 1st Battalion South Staffordshire Regiment War Diary regarding action at the Munich trench (fully illustrated in image 3). All are beautifully mounted on a purple felt background in a glazed dark wood frame (24”x 21”x 1 ¼”). The rear of the frame is mounted with cord for wall hanging. The price for this MM group to a heroic British Soldier who was wounded in action and awarded for bravery in 2 of Britain’s Major conflicts includes UK delivery. M 111 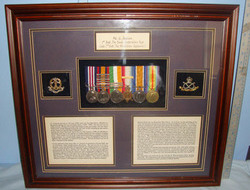