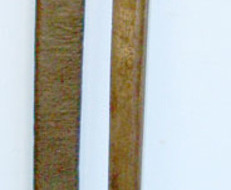 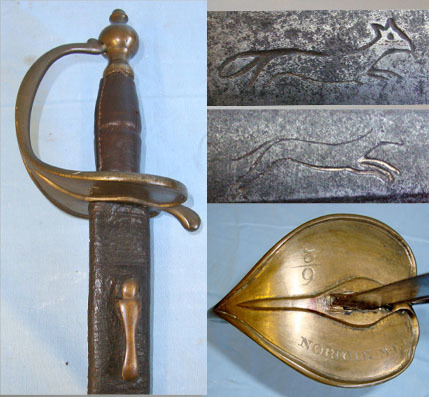 An original C1770 British Infantryman’s Hanger Short Sword Sidearm. See page 154 of World Swords 1400-1945 By Withers where these hangers particularly complete with scabbards are described as rare. Our example has a 27 ¼” long, single edged curved and fullered blade and measures 33 ½” overall. The blade has staining consistent with age but no damage. The blade is marked on both sides with the running ‘Wolf / Fox’ mark of the German Passau guild of swordmakers (these marks in various forms were used by sword makers in Passau, Bavaria and then later by Solingen manufacturers. It was common for British swords to be made using German blades in the era). It has leather bound handle, heart shaped brass hand guard with curved knuckle bar and urn shaped pommel. The guard is crisply Regiment maked ‘6/2 Norfolk M.E.R’ most likely a unit of the Norfolk Militia which was formed under the Militia Act of 1757, replacing earlier less formal arrangements.The Sword is complete with its rare to find original leather scabbard with correct elongated brass belt hook near to the throat (identical to the example illustrated on page 154 of Wither’s book). The leather is supple but has areas of wear to be expected with age and service use. The stitching of the rear seam is absent as its brass chape. The price includes UK delivery. Sn 16019