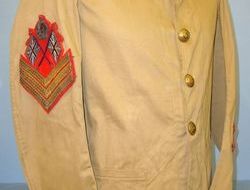 
The Loyal Regiment (North Lancashire) (until 1921 known as The Loyal North Lancashire Regiment) was an infantry regiment of the line in the British Army from 1881 to 1970. Today, the Regiment's lineage is continued by the Duke of Lancaster's Regiment. During WW1 the Loyals joined the Tigris Corps in its operations to relieve the Anglo-Indian garrison besieged at Kut, fought against the Ottoman Forces and served in what is now Iraq. The Loyals were dispatched to serve during the Chanak Crisis. In the inter War years the Loyals served in China during the Warlord Era and the Chinese Civil War, protecting the legation in Peking and the international settlements at Tientsin, Canton, and most importantly Shanghai. Upon the commencement of WW2 hostilities in 1939 the Loyals fought in Europe. The 2nd Battalion, Loyal Regiment found themselves stationed in the Far East as part of Singapore Fortress's 1st Malaya Infantry Brigade. After the Japanese attack on Pearl Harbor, the 2nd Loyals fought in Malaya as part of the delaying action during the Battle of Malaya. This is an excellent original inter war Loyal North Lancs Regiment Colour Sgt’s single breasted India/ Far East Service Tropical Tunic/ Shirt with ‘stand’ collar. All material and stitching are clean and intact. It has all of its King’s Crown Regimental brass buttons. The right sleeve is mounted with removable King’s Crown bullion embroidery Colour Sgt’s Arm Badge and the lower left cuff with removable King’s Crown embroidery crossed rifles (both insignia are mounted with metal hooks which attach to stitched loops on the sleeves). It has 2 open top pockets to the front. The tunic/ shirt is approx chest size 36”. Price includes UK delivery. Sn 11269
£350.00 ...Read full description
CategoryAccessories
SubcategoryClothing
ConditionUsed
Price£ 350
Sale typeTrade
Manufactured YearInter wars period
Your reference11269
Recommended UsageCollection item

In our community section
More about this: Lead Ammunition is on the way out...