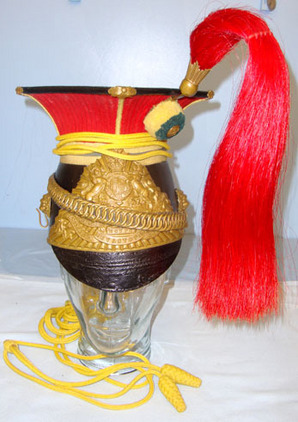 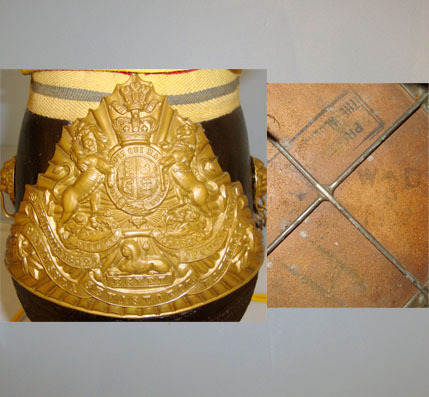 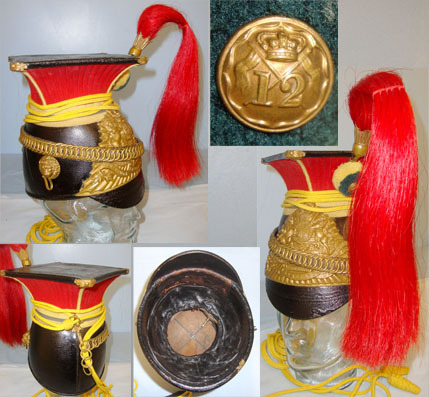 The 12th (The Prince of Wales's) Royal Regiment of Lancers, was a Cavalry Regiment of the British Army first formed in 1715. It saw service for three centuries, including the First World War and the Second World War. The Regiment survived the immediate post-war reduction in forces, but was amalgamated with the 9th Queen's Royal Lancers to form the 9th/12th Royal Lancers (Prince of Wales's) in 1960. The Regiment of Dragoons was raised in Reading by Brigadier-General Phineas Bowles as the Phineas Bowles's Regiment of Dragoons in July 1715 as part of the response to the Jacobite rebellion. In 1718, the Regiment was placed on the Irish establishment and posted to Ireland, where it remained for 75 years. In 1751, the Regiment was officially styled the 12th Dragoons. In 1768, King George III bestowed the badge of the three ostrich feathers and the motto "Ich Dien" on the regiment and re-titled it as The 12th (Prince of Wales's) Regiment of (Light) Dragoons. A young Arthur Wellesley joined the Regiment as a subaltern in 1789. The Regiment took part in the Siege of Bastia in April 1794, which took place in Corsica, during the French Revolutionary Wars. Pope Pius VI was impressed by the conduct of the Regiment and ordered that medals be awarded to its officers. The Regiment landed at Alexandria in March 1801 and saw action at the Battle of Alexandria later in the month. The Regiment, captured 28 officers and 570 other ranks of the French Dromedary Regiment in an action in the Egyptian desert in May 1801. It took part in the Siege of Cairo securing the city in June 1801 and then participated in the Siege of Alexandria taking that city in September 1801. The Regiment next deployed for the disastrous Walcheren Campaign in autumn 1809. In June 1811 the Regiment embarked for Lisbon and took part in the Siege of Ciudad Rodrigo in January 1812, the Siege of Badajoz in March 1812 and the Battle of Villagarcia in April 1812 during the Peninsular War. It also undertook two charges at the Battle of Salamanca in July 1812 before taking part in the Siege of Burgos in September 1812,the Battle of Vitoria in June 1813 and the Siege of San Sebastián in autumn 1813. The Regiment next advanced into France and supported the infantry at the Battle of Nivelle in November 1813. During the Waterloo Campaign, the Regiment was attached to Sir John Vandeleur's Light Cavalry Brigade. At the Battle of Waterloo in June 1815, the Regiment charged down the slope to support the Union Brigade of Medium Cavalry. In 1816, the 12th Light Dragoons was armed with Lances after the Cavalry of Napoleon's Army had shown their effectiveness at Waterloo and were re-titled 12th (The Prince of Wales's) Regiment of (Light) Dragoons (Lancers). In 1855, it reinforced the Light Cavalry Brigade in the Crimea after the Charge of the Light Brigade at the Battle of Balaclava. In 1861, the Regiment was renamed 12th (The Prince of Wales's) Royal Regiment of Lancers. The Regiment was stationed in India between 1857 and 1860 in response to the Indian Rebellion and in Ireland from 1865 to 1870, before fighting in the Second Anglo-Afghan War in the late 1870s. The Regiment went on to serve and see action in the Boer wars 1899-1902, WW1 and WW2. Prior to the Boer Wars the Regiment was awarded the following Battle Honours: Egypt, Salamanca, Peninsula, Waterloo, South Africa 1851-2-3, Sevastopol, Central India. This is an original, Victorian Trooper’s Lance Cap of the 12th (The Prince of Wales's) Royal Regiment of Lancers (see multiple entries including pages 13, 19,128 & 129 in the book ‘Head Dress Of The British Lancer’s 1816 To The Present’ by Rowe & Carman which illustrates & describes head wear and badges as worn by the 12th Lancers). The Lance Cap has the correct internal construction, skull and peak of black patent leather with correct yellow and black cloth waistband. The rear has the correct brass ring & hook. The sides are covered in scarlet facing cloth. Yellow twisted rope piping with ornate brass finials extends down the 4 angles. The cap has the correct green & yellow wool ball rosette with Crown and ‘12’ (12th Lancers) gilt button and Lion’s head bosses with correct leather backed link brass chain. It has a brass plume boss with correct scarlet horse hair plume. The cap is fitted with original cord lines and correct rayed plate and badge comprising the Queen’s Crown Royal arms, Prince of Wales Feathers and pre Boer War Battle honour banners together with Sphinx on plinth Egypt Honour. The cap is complete with original leather sweat band liner. The crown of the inside of the cap has a partially visible ink stamp and WD arrow mark (all illustrated inset in image 2). The cap is approx UK size 6 1/2. The price for this impressive Lance Cap to a Prestigious Lancer’s Regiment includes UK delivery. Sn 14666:6 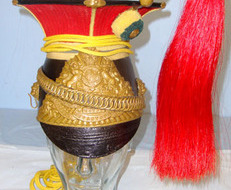