Airgun Review: The Artemis P15
Big Trouble From Little China - Artemis P15     My son has been driving me up the wall over the past couple of months as he insists on going vermin hunting with the Bullpup r...
Read more
Home / Shotguns / Side By Side / United Kingdom / North West 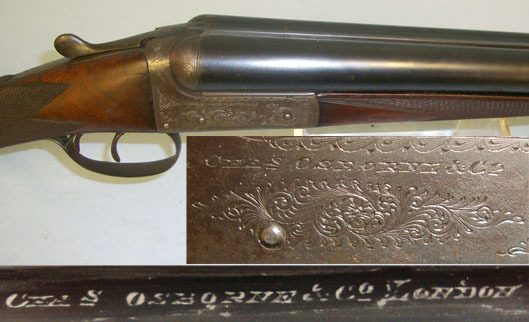 
Charles Osborne commenced trading under his own name C1845 in Lichfield Street, Birmingham but by 1855 he was in Whittall Street, Birmingham where he maintained premises right up until 1928 when the business was acquired by Skimin & Wood, a highly respected gunmaker to the trade. Osborne first opened for business in London in 1881 in the vicinity of Houses of Parliament in 1885 where he stayed until the business left London in 1928. Charles Osborne became a Limited company in 1896. This is a double barrel hammerless sporting shotgun by Charles Osborne made sometime in the early 20th Century. It has 30” blued steel barrels. The barrels, set side by side have a central flat top barrel rib and bead foresight. The rib is signed ‘Chas Osborne & Co London’. It has its original walnut stock which has just the knocks, bumps and bruises to be expected with age and use and double triggers. The wrist & fore stock have chequered panels and the underside of the stock has an inlaid German Silver escutcheon. The action is signed by the maker ‘Chas Osborne & Co’ on the left & right sides. The shotgun is number 74841. Deactivated to UK / EU specification the weapon’s top lever break action opens the breech and its safety catch slides. The price includes UK /EU deactivation certificate & UK delivery. D 1468
£295.00...Read full description
CategoryShotguns
SubcategorySide By Side
ConditionUsed
Price£ 295
Sale typeTrade
MakeCharles Osborne & Co London
Calibre12 Bore/gauge
Model12 Bore Double Barrel Side By Side Hammerless Box Lock Breech Loading Top Lever
Manufactured YearEarly 20th Century
CertificateNo Licence
Your referenceD 1468
Gun StatusDeactivated
Recommended UsageCollection item

In our community section
More about this: Using Call of Duty to prep for a Covid-19 apocalyp...