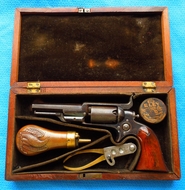 This is a decent Colt Roots second model side hammer revolver in 28 Calibre. It is estimated that only 2.99 % of these revolvers survived. This particular revolver was manufactured in 1856 at the Hartford factory and is contained in its original USA case. The case contains the correct mould with the flying Eagle motif, powder flask and an Eley cap tin. Poignantly the mould contains two cast bullets frozen in time, oxidised and obviously contemporary to the revolver. There would have been made by a previous owner. They are loose and will drop out of the mould. The revolver has much original finish, the patent date and Hartford address on the top strap and most of the original varnish. The cylinder scene is extant but faint and the Colt Patent banner is clear. The case has an old crack in the lid which isn’t going anywhere and could be restored. Personally, I would leave it.


The Roots had fierce competition from larger Colt models such as the Navy and Army and eventually they were made in 31 calibres as were the Colt Pocket model 1849.Despite its small size, designed to be easily concealed, there are numerous images of Civil War soldiers carrying these as their sidearm.
...Read full description
CategoryPistol / Hand Guns
SubcategoryRevolver
ConditionUsed
Price£ 3,750
Sale typeTrade
MakeColt
CalibreNone
ModelCased Colts Roots Revolver 1855 Patent.
Manufactured Year1856
Antiqueyes
MechanismPercussion
Gun StatusActivated
Recommended UsageCollection item