Are you team Gamo or team Weihrauch? Well, new data compiled by Alpha Militaria shows that US and UK airgun shooters have very different interests in their air rifle of choice! The most popular Air Rifle brand in the US is Gamo, whereas in the UK Weihrauch tops the list. Gamo being a Spanish company has traditionally had stronger ties to the US, whereas Brits are more fond of their German neighbours, Weihrauch; which is distributed under the Beeman name in the US.

It’s also not a shock to see BSA come in at second on the British list, being a native Birmingham manufacturer. But did you realise that BSA air rifles virtually don’t exist across the pond? It’s hard to imagine such a prolific brand in the UK, being almost unheard of in the USA…

The USA list features Benjamin Airguns in 3rd place. If you’re not familiar with Benjamin, it’s an American sub-brand of the well-known Crosman Guns - you may recognise the popular Benjamin Marauder?

Most Popular Rifles - Range and Models 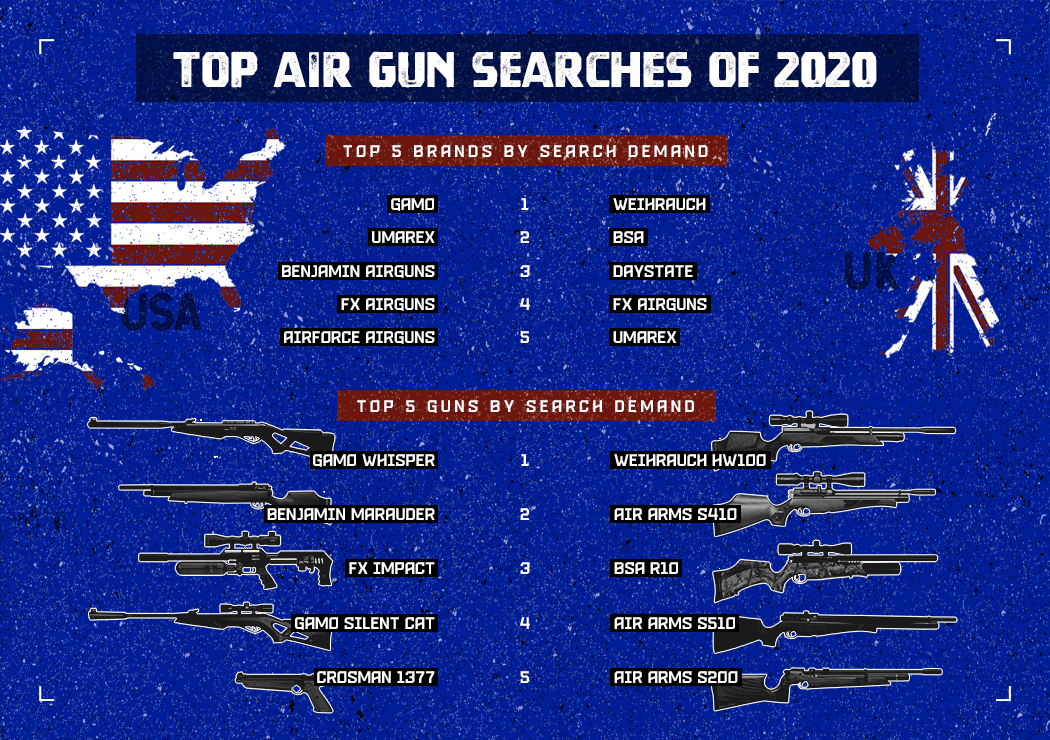 While brand loyalty is definitely a thing in the world of airgun shooting, most shooters care specifically about their rifle and model. Well, not surprisingly it’s a case of Gamo vs. Weihrauch again... In the US the Gamo Whisper range topped the list whereas the Weihrauch HW100 range was the most popular amongst the UK audience. The HW100 being one of the oldest and most respected rifles out there it’s no big surprise it tops the list in the UK - head down to one of your local shooting ranges and you’ll find this is very common amongst hobbyists. Whereas the Gamo Whisper represents more of your entry level air rifle that’s not only great for the price but lightweight, balanced and will do exactly what you want it to do. Factoring in the price and the quality it’s also clear why this is a firm favourite amongst American’s too, being a great rifle for beginners. For the full insight see the infographic Alpha Militaria created.

How is the data sourced?

Different airgun rifle models and brand names were queried in Google Adwords to find the Search Volume in the US and the UK for these keywords. Google Adwords traditionally gives this data out for paid search in Google.

Alpha Militaria is an online review website for air rifles and related information. Set up in late 2019 by three hobbyists who realised that you can find a wealth of information down at your local shooting range but online it can be difficult so wanted to help get some of that information in front of people.

The team at Alpha Militaria have a wealth of experience having written for some of the biggest Airgun magazines in the UK and of course they’ve been shooting for years between them.

Right now Alpha Militaria have in-depth reviews on Air Arms, BSA, Weihrauch and Walther/Umarex rifles and are regularly publishing content. You can see their site here.