Advice Rifles
Gun Dealers Gun Shops Shooting Grounds Shooting Accessories Antiques/Militaria Shooting Instructors Gun Repair
All service types >
Business types
Regions
Favourite ads
Last viewed
Saved searches
Last searches
Ads that you mark as favourite will be shown here.
Come back here to remember your latest viewed ads.
When you browse ads, the searches that got you there will show up here.
Your saved searches will show up here.
Home / Community home / News / Memories of Shooting and the c...
Be a contributor
News · Airguns reviews

Memories of Shooting and the current AirMADgeddon leaderboards!

My father often allows me to accompany him on his hunting or shooting expeditions and - I must admit - I enjoy my time out with him; the interesting stories he tells and the experiences we have make our outings all the more worthwhile.

I recall one particular expedition when I was a young boy of between nine and ten years of age. My father and I had been out in the woods for a couple of hours. We’d completed our early morning stroll of our land and woods and had taken shelter to rest in our usual open camping spot under the thick pine trees. We’d been lying in wait patiently for a rabbit, squirrel or wood pigeon to come along.

It was a bright warm Summer afternoon and the sun was beating down on us from behind, keeping us warm as we lay there in the cool grass. When suddenly, the eerie silence was broken by the sound of tearing grass and crunching, then out of thick brush popped a Red Deer. I’ll never forget seeing my first Red Deer, this was a magnificent beast; It stood tall on all fours, completely still, head high above its vast body and long majestic neck. In one swift motion it rapidly swung its head in our direction, and it appeared to almost stare right into my eyes. At first, I was terrified by the animal, I wondered ‘had it seen me?’ Did it know I was there? The way it looked at me, was it wondering who I was and why I was on its territory? 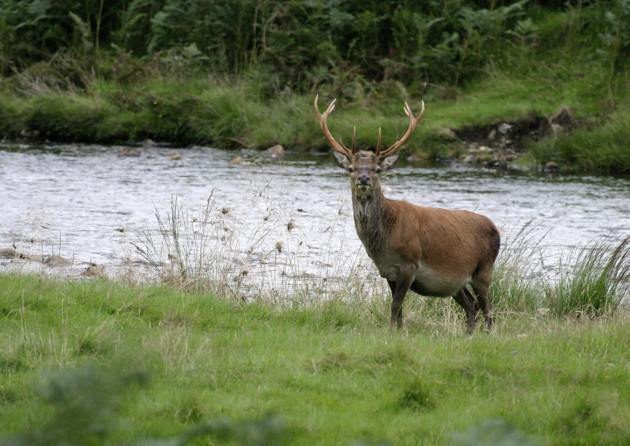 I felt comfort knowing that my father was beside me, I slowly shifted my gaze from the animal to my father, who was laying there with his head and eyes poised in the direction of the deer. He’d probably seen a hundred Deer in his time, yet him still being amazed by the creature showed how much of a spectacle it was. I lead my view back to the beast but it no longer returned the favor, instead it was looking far off into the distance and before I could make sense of where it was looking it rose one foot into the air and took off into a sprint directly for the tree line. Within a matter of seconds, it was gone and the silence took its place. I’d never seen such a thing of beauty, wonder and elegance with my own eyes and it left me in awe.

My father smiled at me and I smiled back, “that was a Red Deer” he said softly, “probably one of the largest I’ve seen”. Words had left me at this point, but my father spoke again “well that’s enough for one day, let's get our things and head home”. We both knew the day was done and what better note to leave on.

We began our long trek back to the car, and my father spoke about all the animals he’d seen: foxes, badgers, minks, dragons and dinosaurs, but I knew he was pulling my leg, I wasn’t too young to know dragons are things of fairy tales.

As time passes by, we seldom get a chance to go shooting together, I know my father misses our excursions and every now and then he reminds me of all the things he wants to do with me and my younger brothers. He also tells me I’ve become too embroiled in computer games instead of enjoying the great outdoors. Sadly, the Summer months and holidays have passed and so too the opportunity to show my father I’m still very much the young boy who enjoys his father's company, and a day in the woods.

My father’s been very busy as of late, meeting people and joining local airgun clubs, in an attempt to promote the AirMADgeddon annual benchrest competition. He’s been talking to me about the competition at every opportunity he gets, and has taken me out to shoot draft, practice and final competition cards. With him being so busy I asked if I could help him out, and he suggested I write the first results article on the competition. I’m not much of a writer, so I’m warning you in advance, but I’m sure my father will help out with this when he edits it before having the article published on GUNSTAR. 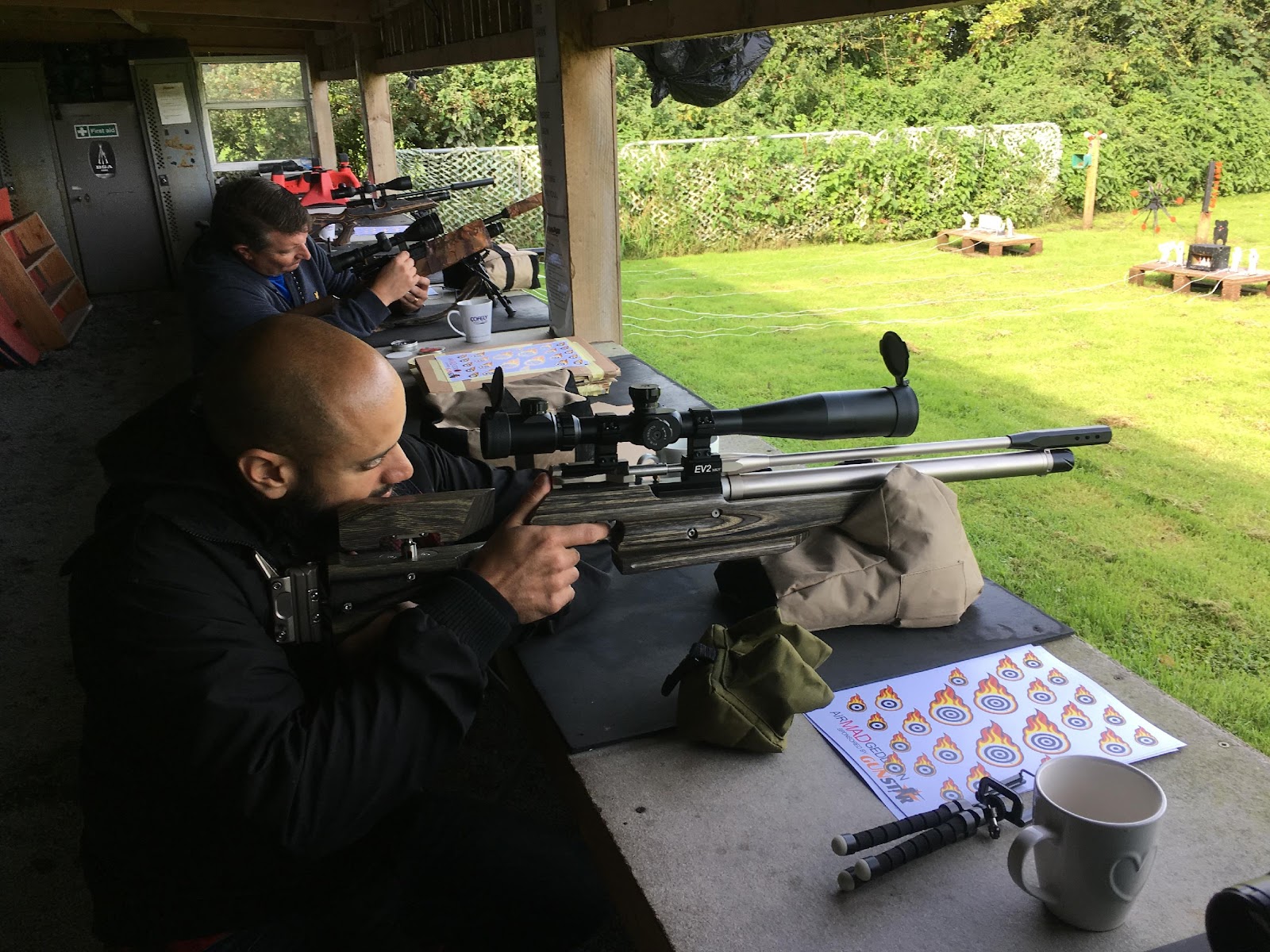 From what I’ve seen and heard, the AirMADgeddon competition has taken off nicely, my father spends his evenings preparing card packs for the competitors and he then posts these out to any airgun shooter who wishes to compete. Some of his friends and family also nip by our home to collect cards and talk about meeting up to shoot. He regularly spends his weekends at the local ranges or on his land accompanying competitors whilst they shoot the competition cards. Before the launch of the competition he sent my Air Arms EV2 rifle off to be tuned and had it fitted with an aftermarket regulator. It came back shooting like a dream with precision pin point accuracy, I think he’s expecting me to do well, but he keeps telling me he’s just happy to see me take part. 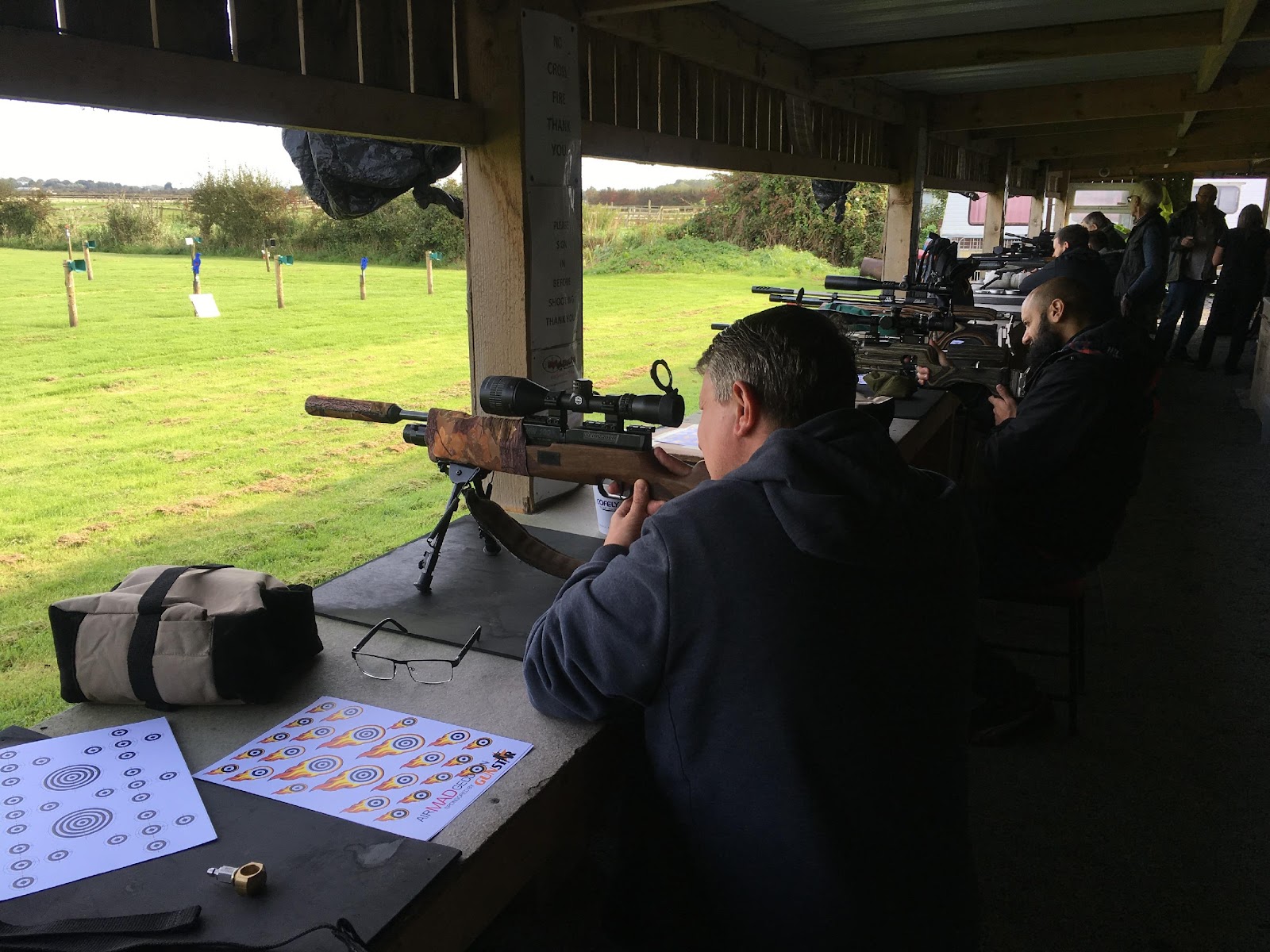 Shooting the competition cards hasn’t been easy; my high-magnification scope helps to some degree but because we’ve been shooting the cards outdoor, the wind and sometimes rain has meant our results haven’t been great, but that’s what makes the competition interesting.

The best of the cards I’ve shot is pictured below, as are some other competitors cards, who agreed to let my father publish them. I’ve also asked my father if I could produce a table of the current leaderboard standings, and he’s happily provided me with this data and some photographs above of the competitors at one of the local airgun ranges. 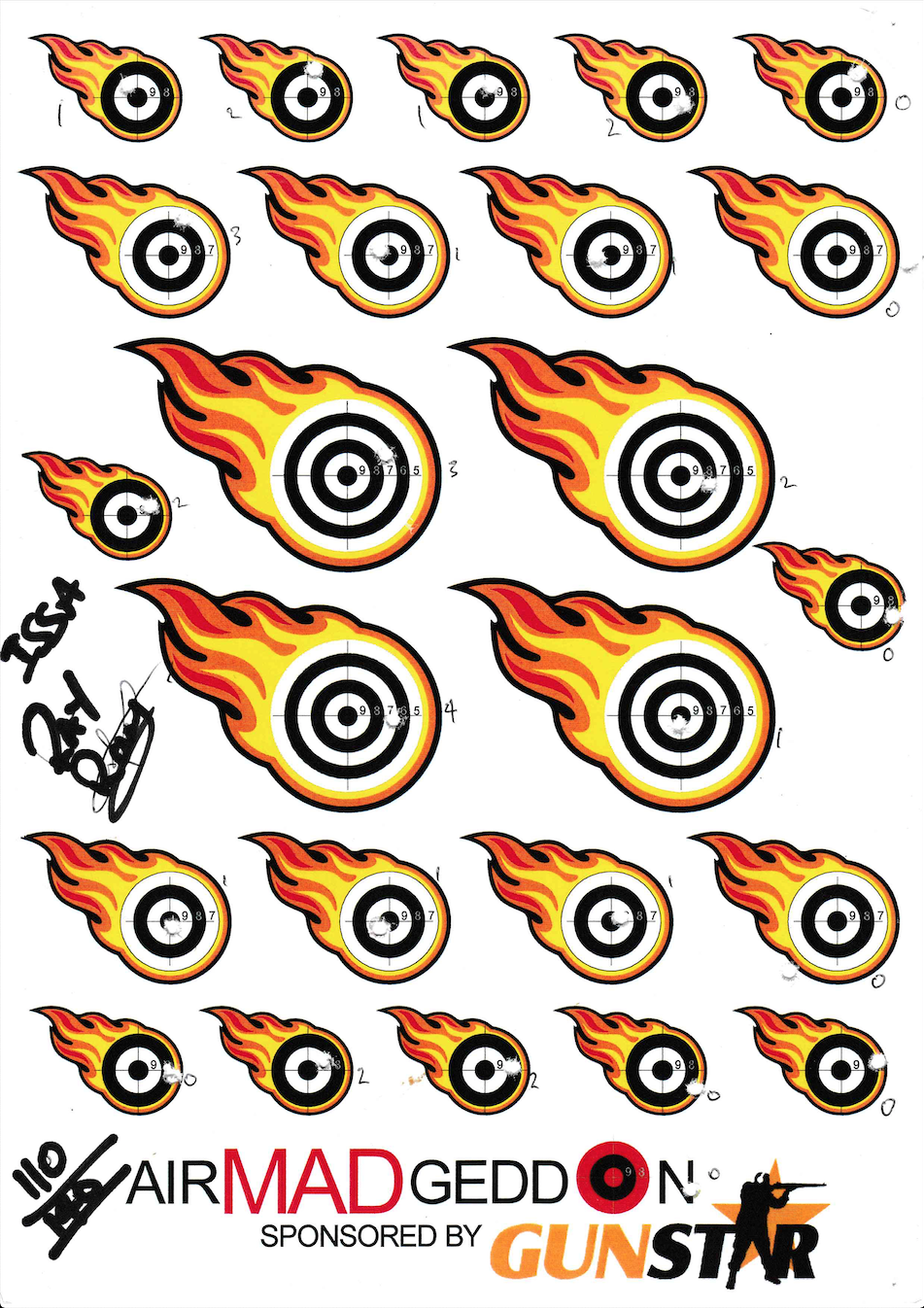 Issa Hussain. Score: 140 (Out of a possible 250). This is my best result so far, shot on a warm clear Saturday morning. The wind was blowing from left to right and I managed to adjust just enough to keep most of my shots within the target areas. I will be looking to improve this over the next twelve months. 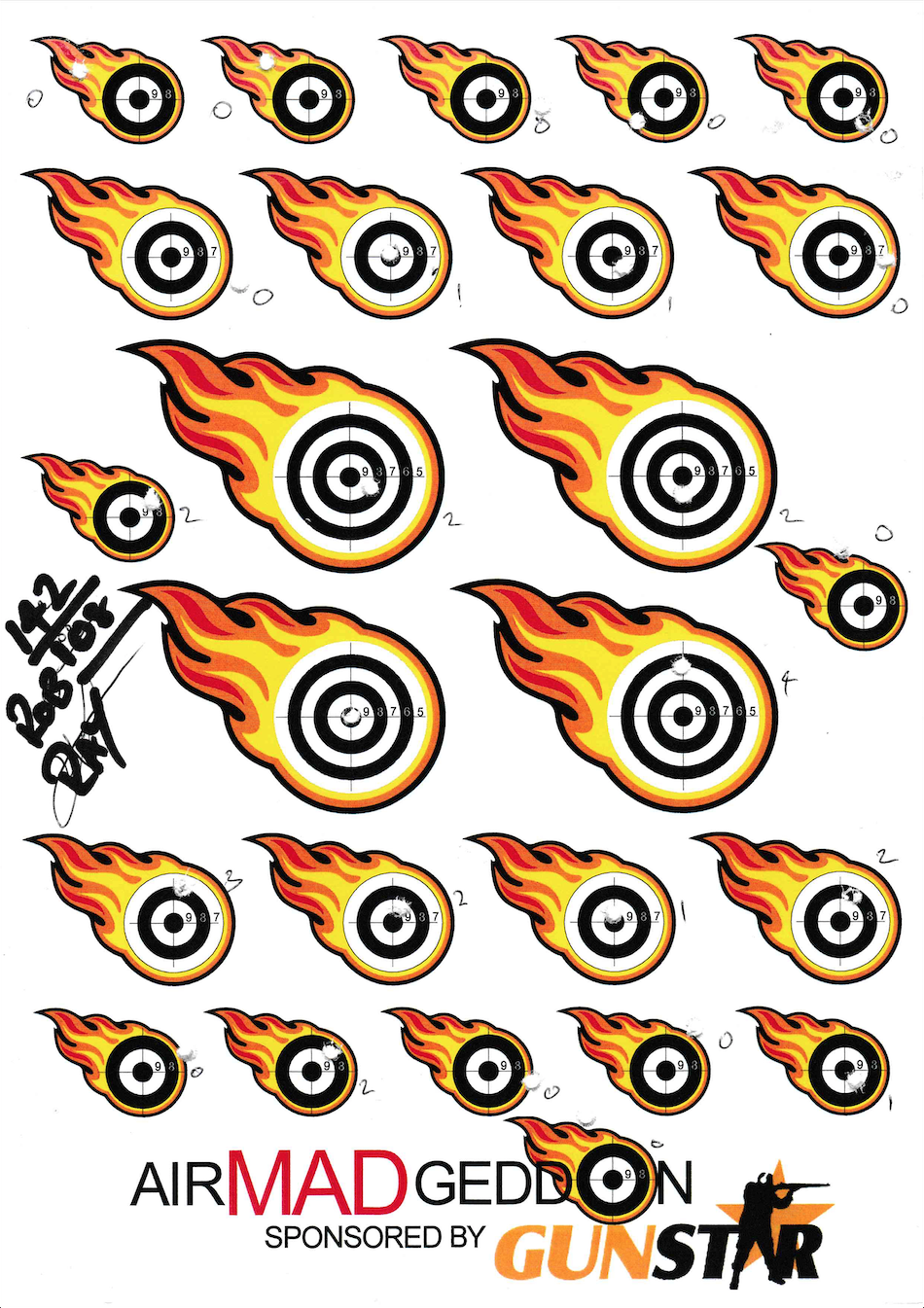 Robert Ellis. Score: 142 (Out of a possible 250). Robert scored slightly better than I did, although my father informed me, Robert is capable of so much more and if he’d not been in a rush to get to his beach house for a party, he would’ve shot much better. 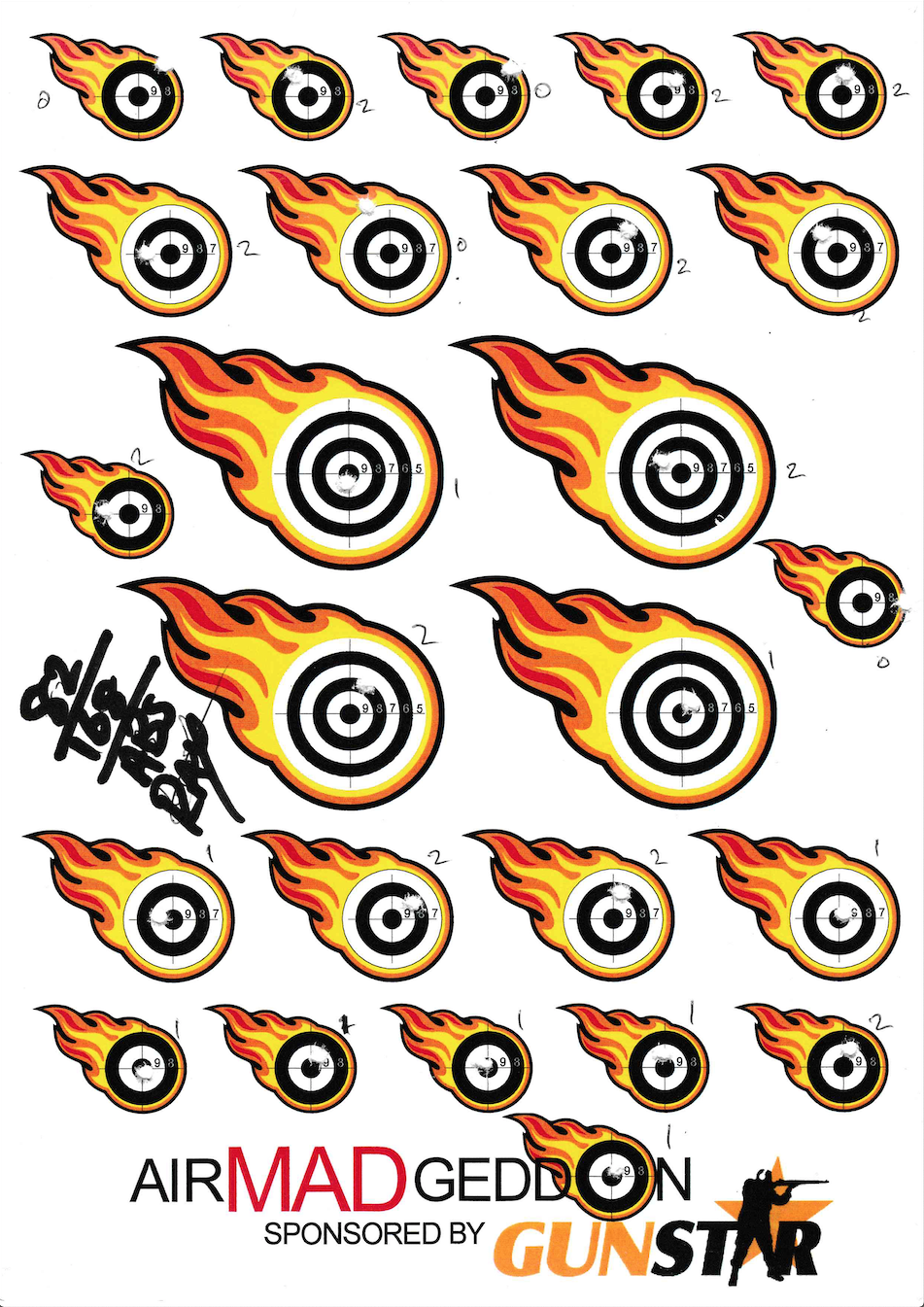 Abs Hype-Williams. Score: 168 (Out of a possible 250). Abs is a veteran shooter with many years of target shooting, 10m pistol and 10m Rifle shooting under his belt. He refused to shoot any of his practice cards and went all out to prove his marksmanship skills. It’s a good card overall, but I don’t think it’s a winning card, and I’d suggest he utilises the practice cards next time to improve his score. 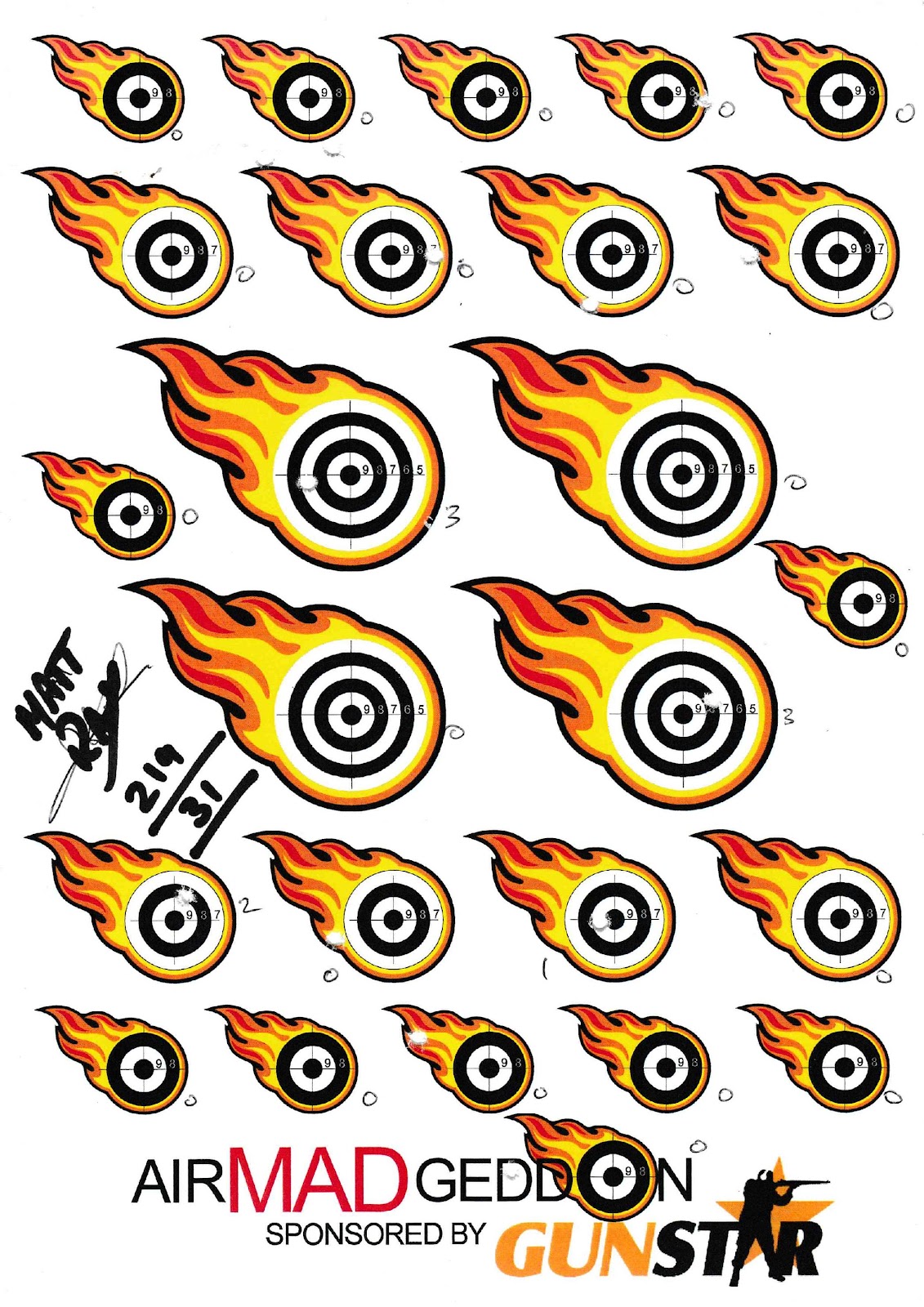 Matt Bretton. Score: 31 (Out of a possible 250). My father convinced Matt to allow him to publish his card, albeit the score was very low, but that’s nothing to be embarrassed about. Matt had stumbled across the AirMADgeddon competition page on GUNSTAR, whilst he was looking at buying an airgun to take up airguning as a hobby. Matt contacted my father via facebook hoping for some advice and introduction into the sport. He met my father and a few other competitors for his first outing with an airgun, a HW100 that was kindly loaned to him by Robert. Matt managed to get his eye in as the day went on, but he has a lot to learn. One thing this card and score does prove however is, anyone out there who thinks shooting is easy, is clearly mistaken - there's more to it than just pointing and pulling the trigger. Matt has taken to airgun shooting and looks forward to shooting many more cards to improve his shooting ability and score. Watch this space as Matt’s journey continues. 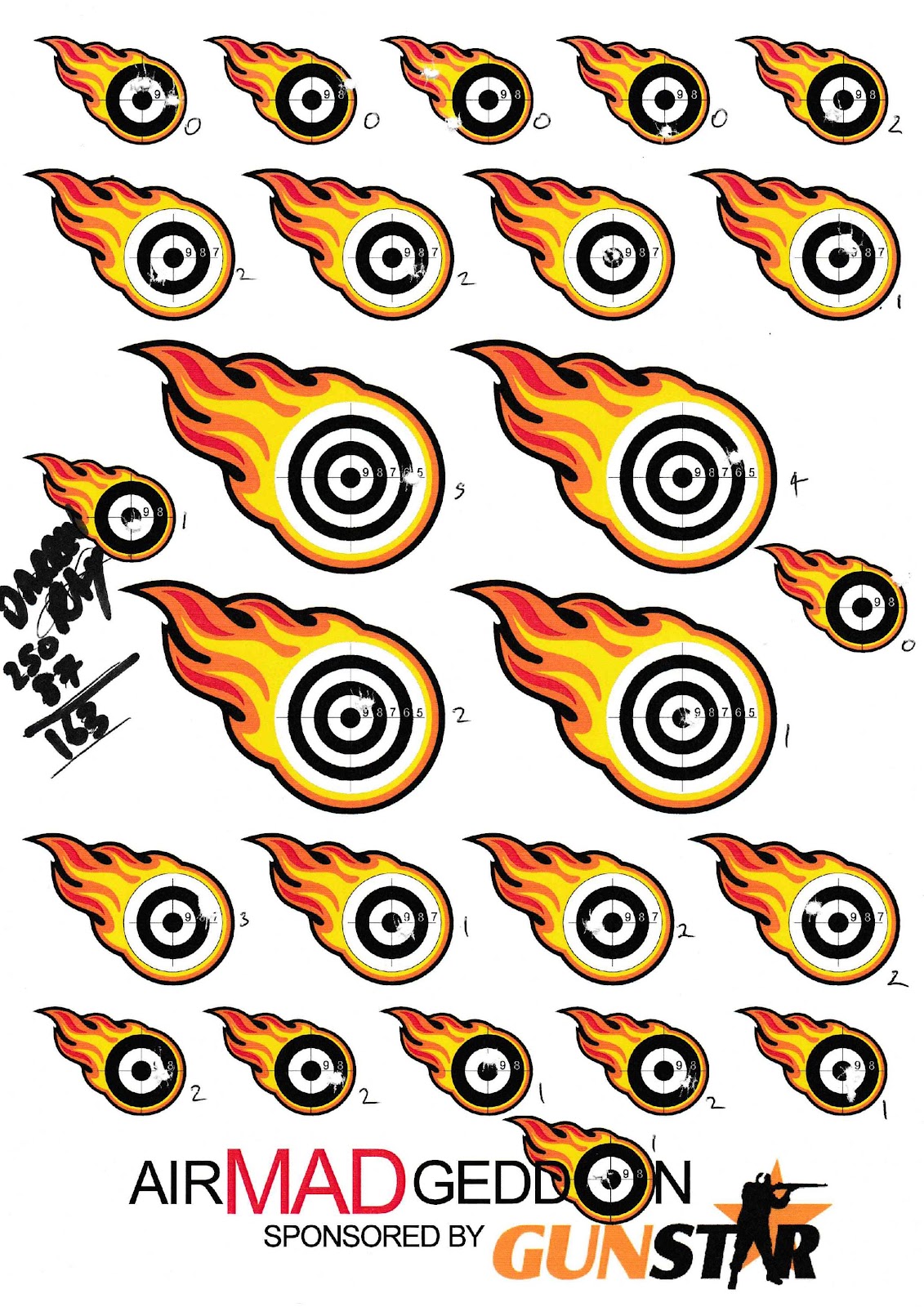 Darren Brown. Score: 163 (Out of a possible 250) Darren, another experienced shooter, spends a lot of time on his permissions carrying out pest control. As an amateur pest controller, he knows all too well the importance of shot placement and the difference between hitting the kill zone or maiming an animal with a badly placed shot. If this was 25 shots at the same target, he would have a 1inch group. Not bad Darren, well done, but will it be enough to win the prize? 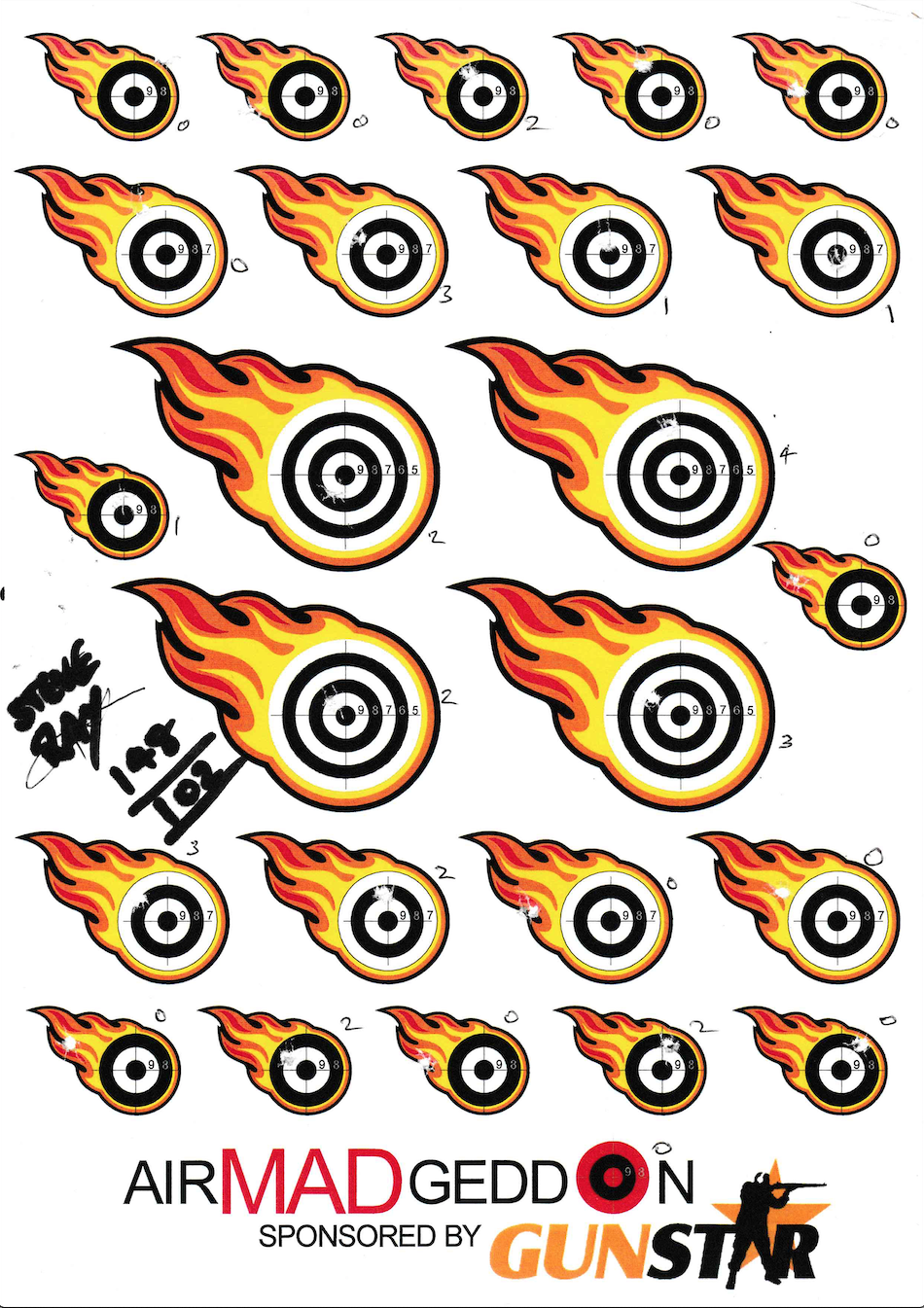 Steven Rogerson. Score: 102 (Out of a possible 250). Steven is a plasterer from Manchester, who likes to wind down after a long hard week at work with some garden plinking. Steven shot this card in his own back garden on his private 30yard range. Well done Steven, we hope to see more from you as the year goes on. 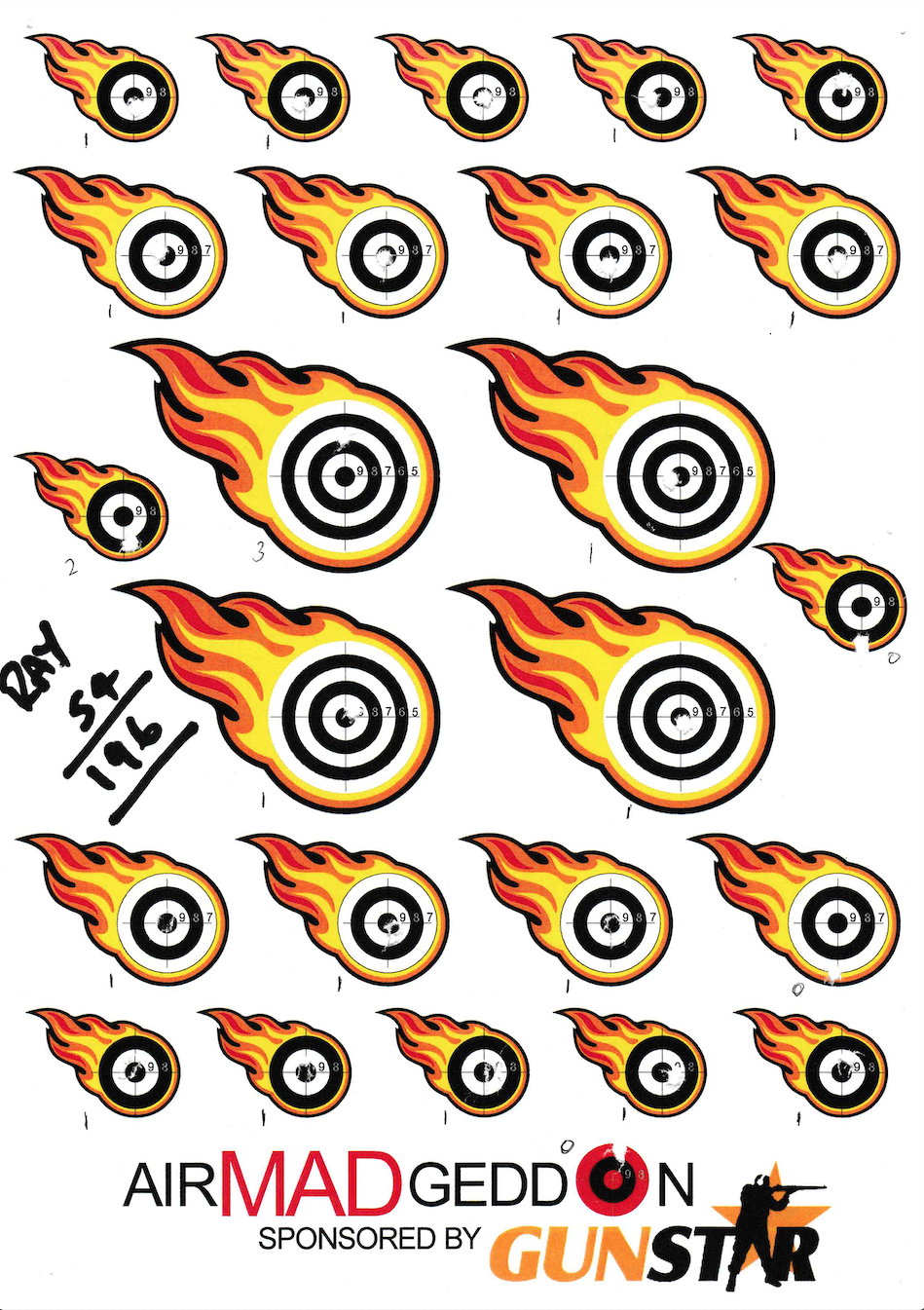 Ray Hussain. Score: 196 (Out of a possible 250) Finally my father's card, I think he could have done better, he simply lacks the patience when it comes to shooting targets and shot this card in record time with his FTP900. 25 shots in just under 90 seconds. Slow down dad, the name of the game is patience not speed. A good start to a great competition.

The Current Score Board


Anyone who is still interested in joining the competition or looking to purchase more cards, can do so at any time by following this link and contacting Ray Hussain by email on [email protected] for entry details and competition cards. I hope you enjoyed my first write up, like my father says, As always Shoot Straight and Shoot Safe. All The Best Issa Hussain.