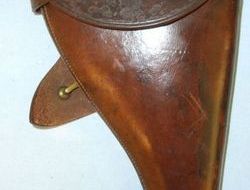 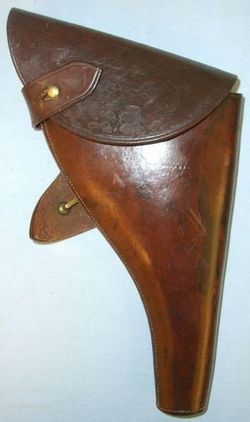 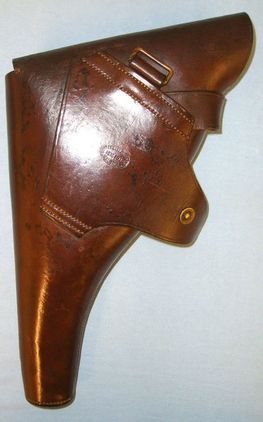 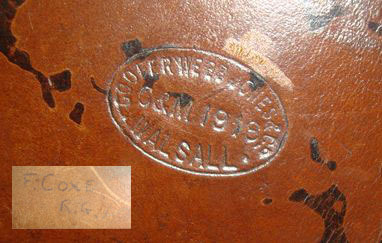 
A superb condition brown leather holster, dated 1915 for the Webley & Enfield MK VI .455" Calibre Service Revolvers. It has a full flap cover with single brass stud and has a retaining strap with eyelet stitched to the body. The rear of the body is impressed with manufacturer roundel ‘Cooper Webb Jones & Co Walsall ‘ and dated 1918 (illustrated). It has a large rear belt loop with original brass bar and hook for attachment to Sam Browne belt rigs. The inside of the flap has contemporary ink hand writing ‘F.Coxe’ & Faint ‘RGA’ no doubt the WW1 Officer who owned this holster (illustrated inset in image 2). Force War Records indicate that a 2nd Lieutenant F. Coxe served with the British Royal Garrison Artillery in 1918. The Royal Garrison Artillery (RGA) was an arm of the Royal Artillery 1899-1924. It was originally tasked with manning the guns of the British Empire's forts and fortresses, including coastal artillery batteries, the heavy gun batteries attached to each infantry division, and the guns of the siege artillery. During WW1 as the war developed, the heavy artillery and the techniques of long-range artillery were massively developed. The RGA supplied Siege batteries such as were deployed at the Somme and were often supported by the Royal Flying Corps (RFC) who had devised a system where pilots could use wireless telegraphy to help the artillery hit specific targets. All leather and stitching of the holster are intact. Price for this excellent holster to a named Artillery Officer which is worthy of further research includes UK delivery. L 349
£195.00 ...Read full description
CategoryAccessories
SubcategoryCare & Storage
ConditionUsed
Price£ 195
Sale typeTrade
Manufactured Year1918
Your referenceL 349
Recommended UsageCollection item