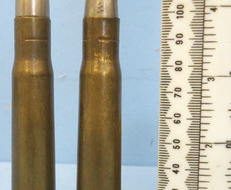 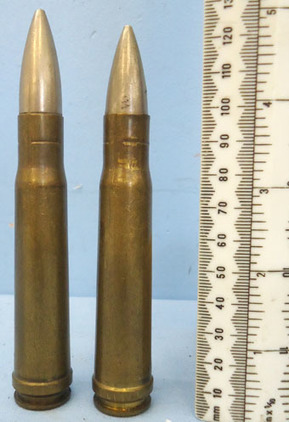 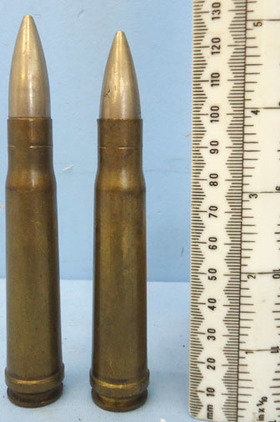 
This round was developed by a Captain H C Boys, a designer at the Royal Small Arms Factory, Enfield resulting in the .55 Boys anti-tank rifle being adopted in 1937. Although the round was adequate against light tanks in the early part of the war, the Boys was ineffective against heavier armour and was phased out in favour of the PIAT mid-war. The Boys anti-tank rifle was a bolt action rifle fed from a five-shot magazine, loaded by means of a 5 round stripper clip. The rifle was large, heavy with a bipod at the front and a separate grip below the padded butt. This is a mark 2 armour piercing round and is headstamped K4 42 WII (Kynoch, I.C.I., Yeading 1942, mark 2 armour piercing) on the brass cartridge case. The Nickel cased bullet is held by 3 stab crimps at the case mouth. The brass primer has a green primer annulus signifying armour piercing. The armour piercing bullets have had a cut across the base of the bullet casing and the hardened steel core to destabilise them if ever they were fired so they are collectable without a licence. This deactivation cannot be seen when the bulleted round is displayed. No licence is required to possess this inert round in the UK if retained as part of a collection or display. The price is for each round. The price includes UK delivery. Rounds are priced individually and there are two rounds available. O 1357
£35.00...Read full description
CategoryAccessories
SubcategoryAntiques & Militaria
ConditionUsed
Price£ 35
Sale typeTrade
Manufactured Year1942
Your referenceO 1357
Recommended UsageCollection item

In our community section
More about this: The UK is seeing a major shortage of ammunition