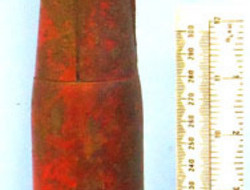 DEACTIVATED INERT. This is a rare German WW2 inert practice 2Kg Incendiary bomb air dropped in containers by German bombers in WW2, and used to great effect in the German Blitzes during the early part of WW2 against British cities. The bombs were made of a magnesium alloy body and fuse holder which would burn brightly and furiously. The body is of a solid piece of steel 279 mm long from the base to the bottom of the fins with an overall length of 524mm. The fin assembly is of three pressed steel fins with a reinforcing ring at the tip of the tail. The bomb retains approximately 30% of its original red finish with Ex in black stencilling on the body signifying Exercise (practice).The price includes UK delivery and no licence is required to possess these inert rounds in the UK if retained as part of a collection or display. There are two rounds available. Sn 13792