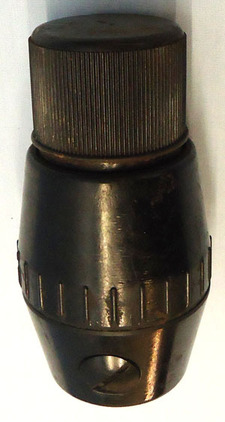 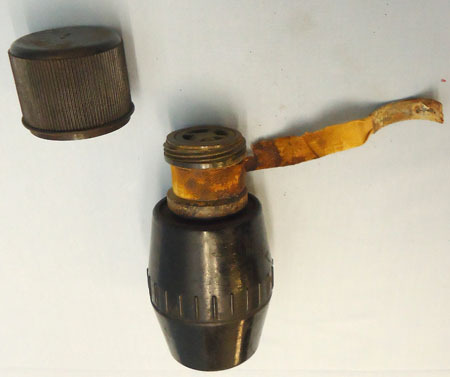 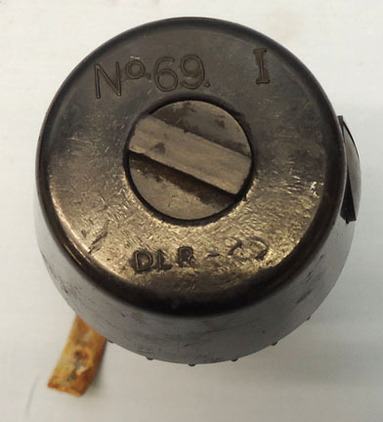 
DEACTIVATED INERT. The British No 69 was a hand grenade developed and used during World War II. It was adopted into service due to the need for a grenade with smaller destructive radius than the No 36M Mills grenade. This allowed the thrower to use a grenade even when there was little in the way of defensive cover. In contrast, the much greater destructive radius of the Mills bomb than its throwing range forced users to choose their throwing point carefully, in order to ensure that they would not be wounded by their own grenade. The shell of the No 69 grenade is composed entirely of the hard plastic, Bakelite, which shattered without producing fragments like a metal bodied grenade. Metal fragmenting sleeves were available to increase the grenade's lethality. Using the No 69 bomb was very simple: the screw-off cap was removed and discarded, and the grenade was then thrown. When the grenade was thrown, a linen tape with a curved lead weight on the end automatically unwrapped in flight, freeing a ball-bearing inside the fuse. In this manner the all-ways fuse was armed in flight and the grenade exploded on impact and like the Gammon grenade, which used the same fuse design, it was withdrawn from service soon after the Second World War ended. This is an excellent original WW2, 1940 dated No.69 grenade. It has the correct Bakelite body with screw off cap and all-ways weighted fuse cord. The base of the grenade is embossed No.69 I and D.L.R.-40 (No, 69 grenade mark 1, Thomas De La Rue London, 1940 date). Under the screw off top is the metal weighted fly of tape of the Bakelite No 247 mark 1 allways fuse. No licence is required to possess this grenade in the UK if retained as part of a collection or display. Price includes UK delivery. O 1603
£245.00...Read full description
CategoryAccessories
SubcategoryAmmunition
ConditionUsed
Price£ 245
Sale typeTrade
Manufactured Year1940
Your referenceO 1603