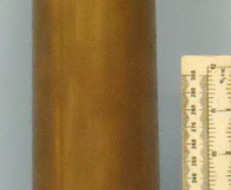 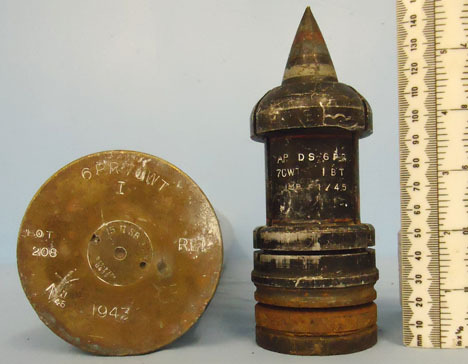 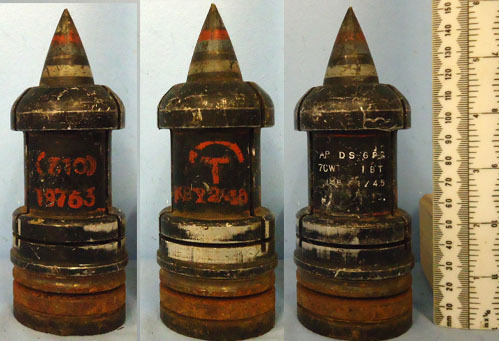 DEACTIVATED INERT. This is a rare British WW2 (1945 dated) APDS/T (Armour Piercing, Discarding Sabot/Trace) round for the British 6pr 7cwt tank and the towed anti-tank guns. The anti-tank gun was first introduced on November 1941. Later the gun was fitted to the Churchill III & IV, Valentine IX, Crusader III tanks and the AEC armoured car Mk III. The APDS/T (Armour Piercing Discarding Sabot/Trace) projectile, introduced into service in 1944 consists of a tungsten core sheathed in steel, fitted inside a light alloy sabot or sheath. Upon firing, the sabot is discarded and the reduced calibre projectile carries on to the target. This projectile carries most of its original paint and is stamped APDS 6PR 7CWT 1BT JMR 1/45 (January 1945 date). The projectile is also stencilled in red round the circumference with the tracer symbol KBY2/45 - Click here to reveal phone number - . The projectile has the following coloured rings at the tip white over red over blue over black over white. The cartridge case is headstamped a 6pr7cwt mark I 1943 RLB (Royal Laboratories). This round was issued from August 1944. See Hogg, British and American Artillery of World War 2, pages 75 to 78. No licence is required to possess this round in the UK if retained as part of a collection or display. Price includes UK delivery. O 1291