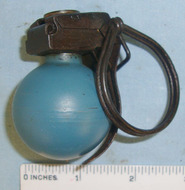 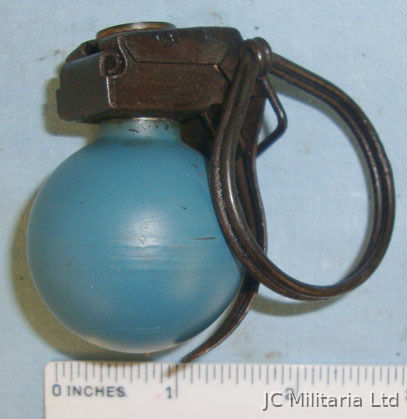 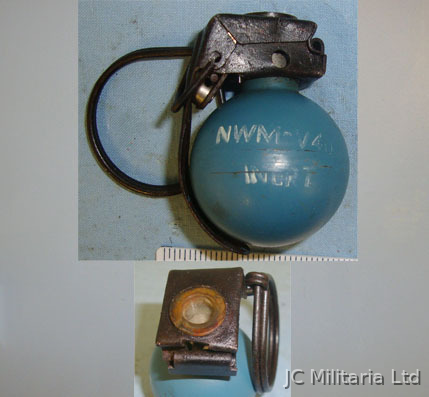 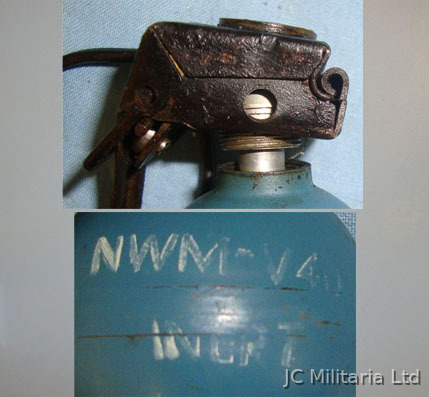 
**INERT** PRACTICE**The V40 fragmentation grenade was manufactured in the Netherlands, and was in service in the Canadian Forces and the US Armed Forces. The V40 grenade is spherical in shape, 6.5 centimetres (2.6”) high, and 4 centimetres (1.6”) in diameter - approximately the size of a golf-ball. It has a safety pin and safety lever with a safety clip attached to the safety lever. The steel body of the grenade has 326 squares pressed into its inside face to produce separate fragments when the explosive fill is detonated. The V40 weighed 136 grams (4.8 oz) and was issued primed from the manufacturer. Fuse delay time was four seconds. This grenade was considered lethal up to a radius of 5 metres (16 ft) and dangerous up to 300 metres (980 ft) from point of impact. It was commonly referred to as the Mini-Frag. Due to its small size, a considerable number could be carried; however, its small size also made the weapon dangerous when wearing gloves, as the impact of the striker on the primer was difficult to feel. These grenades were in service from the late 1960s to at least 2008. This is an excellent inert practice drill example of the V40 mini frag grenade. The hollow casing has original blue paint and stencilled lettering ‘NWM-V40 INERT’. The grenade has the correct pin, ring & lever assembly which can be un-screwed but remains connected to the hollow casing internally by a dummy fuse. The price for this rare practice drill mini grenade includes UK delivery. Sn 18210:8
£475.00...Read full description
CategoryAccessories
SubcategoryAmmunition
ConditionUsed
Price£ 475
Sale typeTrade
Manufactured Year1960’s - c2008
Your reference18210:8