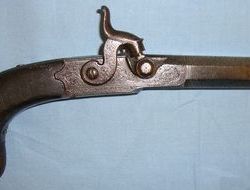 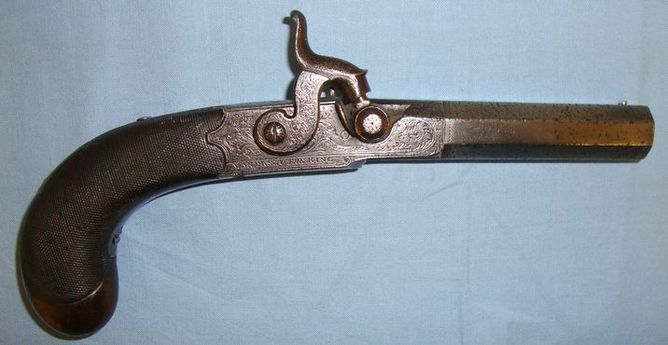 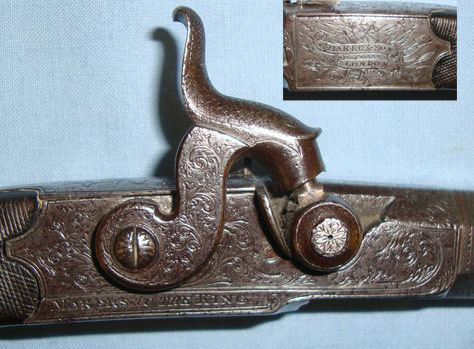 Ezekiel Baker (1758-1836) was apprentice to the famous English Gun Smith Henry Nock of Wilkinson Sword fame before establishing himself as a quality gunmaker in his own right with various premises in London. Between 1823-1854 Baker is recorded operating as E.Baker & Son at Size Yard, Whitechapel Road , 49 Tenter Street & 7 Union Street, London (his son Ezekiel John Baker died in 1841). Baker was the inventor of the ‘Baker Rifle’ which was adopted by the British Army in 1800 and made quality firearms for Royalty (see page 139 of the book British Gunmakers Volume 1 London by Nigel Brown). This is a quality made percussion traveling pistol made sometime between 1823-1854 marked ‘E. Baker & Son London’. The pistol is 9” overall with a 4” octagonal barrel which is .50” Bore. It has a dolphin hammer, concealed trigger, bead fore sight and ‘v’ notch plate rear sight. On the left side amongst the fine banners and arms decoration is engraved 'E.Baker & Son London’ within scrolls (illustrated inset in image 2). The right side is engraved ‘Makers To The King’ below foliate engraving. The underside of the barrel has crisp proof marks. The bag shaped walnut grip has a void silver escutcheon set into the top and fine chequering. This is a quality made pistol by a fine English Gun Smith. The pistol is fully functioning with a crisp trigger action. The price includes UK delivery. NB As an antique percussion pistol no licence is required to possess this item in the UK if retained as a part of a collection or display. Sn 11395