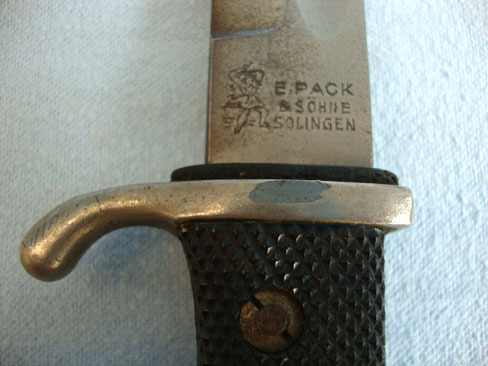 An early Nazi M98 dress bayonet and scabbard. The dress sidearm for military and civilian uniformed formations was designated the M98 Dress Bayonet. This bayonet represented a stylised form of the S. 84/98 bayonet purchased by the individual for wear with the walkout dress uniform and was worn by the mainly non-commissioned officers and enlisted personnel. This early dress bayonet has a rifle mortise and push button release. It retains the green felt in the mortise slot. This is the long version with a 9 3/4" blade which carries the makers logo of E. Pack & Sohne. It has "E. Pack & Sohne Solingen" etched on the ricasso. The polished steel blade is in excellent condition. The grips are chequered and secured with two screw bolts. It has a metal scabbard with lozenge shaped frog stud. (see 'German Clamshells' book pages 15-16 by Gary L. Walker & R.J. Weinand). The price includes UK delivery. Bayo 94 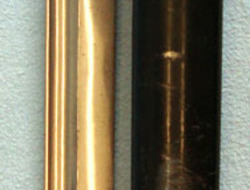