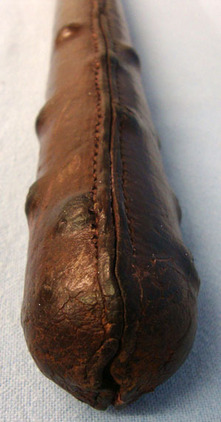 
An early, Circa 20th Century leather covered truncheon, over 'hob nails'. This type of truncheon was typically made and adapted for use in asylums and prisons where violence could break out and had to be quelled quickly. It is made from hard wood and varnished. The grip is an unusual straight 9 groove grip. It measures 17" long. The truncheon has had 'hob nails' knocked into it around the top 6" and then dark brown leather has been stretched over the truncheon up to the grip. The leather is very neatly stitched down one seam and the tip. The hob nails were covered in leather to soften the blow but still make it more harsh than a traditional truncheon. The leather is in very good condition and has a nice patina. The price includes delivery. Sn 10747
£245 Read more