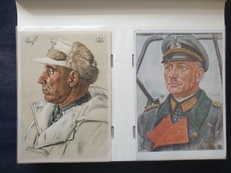 
The collection comprises of 68 various postcards, photos and documents of which 24 Artist Postcard by Willrich.

The Willrich postcards depict both propaganda images of soldiers from different branches of the army, navy and air force.

Nevertheless, we can recognize some key figures of the armed forces, heroes of Nazi Germany as:

- Generaloberst Heinz Guderian – An early pioneer and advocate of the "blitzkrieg" approach, he played a central role in the development of the panzer division concept. He was the commander of the 2nd Panzer Division

- Oberst Karl Lowrick - German general in the Wehrmacht during World War II, and a recipient of the Knight's Cross of the Iron Cross with Oak Leaves of Nazi Germany.

- Generaloberst Dietl - German general during World War II who commanded the 20th Mountain Army. He was a recipient of the Knight's Cross of the Iron Cross with Oak Leaves and Swords of Nazi Germany. Dietl commanded the German 3rd Mountain Division that participated in the German invasion of Norway on 9 and 10 April 1940.

- Oberst Bruno Bauer - general in the paratroop (Fallschirmjäger) forces of Nazi Germany during World War II. He served as a commander on Crete (called Fortress Crete by the Germans) and then commanded the 9th Paratroop Division. After the war, Bräuer was convicted of war crimes and executed, along with Friedrich-Wilhelm Müller, on the anniversary of the German invasion of Crete.

- Kapitanleutnant Fritz Frauenheim - U-boat commander of the Second World War. From September 1939 until retiring from front line service in December 1940, he sank 19 ships for a total of 78,853 gross register tons (GRT), and damaged two others. For this, he received the Knight's Cross of the Iron Cross (German: Ritterkreuz des Eisernen Kreuzes), among other commendations. The Knight's Cross of the Iron Cross was awarded to recognize extreme battlefield bravery or successful military leadership.

- Kapitanleutnant Joachim Schepke - U-boat commander during World War II credited with the sinking of 36 Allied ships.. He was the seventh recipient of the Knight's Cross of the Iron Cross with Oak Leaves. It was Germany's highest military decoration at the time of its presentation

- Major Helmut Wick - commander of Jagdgeschwader (agdgeschwader 1 was a German World War II fighter unit or "wing" which used the Messerschmitt Bf 109 and Focke-Wulf Fw 190 aircraft, between 1940 and 1944. The name of the unit derives from Jagd, meaning "hunt" and Geschwader, meaning "wing"). Flying ace of World War II and the fourth recipient of the Knight's Cross of the Iron Cross with Oak Leaves

- Oberftleutnant Werner Mölders - Luftwaffe pilot, wing commander, and the leading German fighter ace in the Spanish Civil War. He became the first pilot in aviation history to claim 100 aerial victories—that is, 100 aerial combat encounters resulting in the destruction of the enemy aircraft—and was highly decorated for his achievements. Mölders was instrumental in the development of new fighter tactics that led to the finger-four formation.

There is a SA propaganda piece, a pair with Nazi concentration camps, a letter from USA to Nazi Germany, a couple of food cards, a card of a war prisoner, one of a war evacuee, some with German battleships (Nuremberg is one of them) crew and navy flak.

MV Wilhelm Gustloff was a German armed military transport ship which was sunk on 30 January 1945 by Soviet submarine S-13 in the Baltic Sea while evacuating German civilian refugees from East Prussia, Lithuania, Latvia, Poland and Estonia and military personnel from Gotenhafen (Gdynia) as the Red Army advanced. By one estimate, 9,400 people died, which makes it the largest loss of life in a single ship sinking in history.

Constructed as a cruise ship for the Nazi Kraft durch Freude (Strength Through Joy) organisation in 1937, she had been requisitioned by the Kriegsmarine (German navy) in 1939. She served as a hospital ship in 1939 and 1940. She was then assigned as a floating barracks for naval personnel in Gdynia (Gotenhafen) before being armed and put into service to transport evacuees in 1945.

UK postage is £18 or it can be collected in person from our shop.

For international postage please contact us via the messaging service and we will post tracked at cost....Read full description
CategoryAccessories
SubcategoryOther Accessories
ConditionUsed
Price£ 600
Sale typeTrade