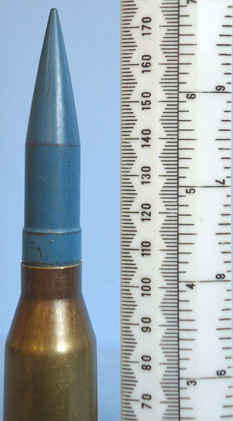 This is a rare inert experimental round developed by FN Browning for the BRG heavy machine gun from 1989 and it was intended as a replacement for the .5” Browning machine gun. The round for this gun was originally developed from the 20mm Hispano HS 404 round which was necked down to 15mm. This was unsuccessful and this resulted in the adoption of the15.5x106 round. The gun was successful but was never adopted by any one and its development was halted. The bottlenecked brass has no headstamp, primer is unstruck and ring crimped into the case. The steel projectile has an iron driving band 8.7mm high and it is painted light blue for practice. Price includes UK delivery. Sn. O 992

More about this
The ‘suicide’ revolver of Vincent Van Gogh has sold for an incredible price.