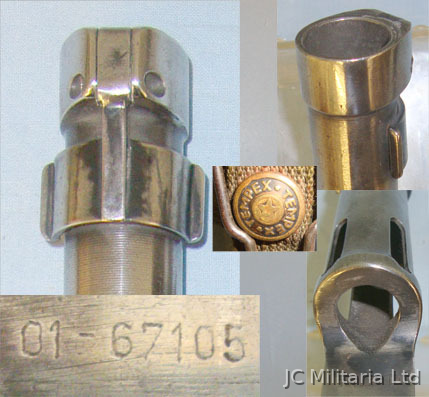 
These socket bayonets were used by Argentine forces in the Falklands War (See Page 22 of An Illustrated History Of Bayonets by Brayley where an Argentine Type C socket bayonet captured during the Falklands war with plastic scabbard & Tempex Frog the same as ours are illustrated). This Argentine Type C bayonet is most likely a bring back from the Falklands war. The all steel construction bayonet is in excellent condition. The tubular socket has the correct release catch ‘ears’ and has the correct cut outs to align with the vents in the rifle flash eliminator. The bayonet has a 6 ¾” long blade and measures 11 ½” overall. The blade has number ’01-67105’. The ‘01’ prefix denotes Army issue (02=Marines & 03=Air Force). There are no other manufacturer marks on the bayonet. The scabbard is the correct black plastic version. The scabbard has a frog locket. The scabbard is fitted with correct webbing frog which has 2 retaining straps with press stud fasteners marked ‘Tempex’ and steel wire belt bar. The rear of the frog has a riveted plastic belt attachment mount. The price includes UK delivery. Sn 18208
£395.00...Read full description
CategoryBlades
SubcategoryBayonets
ConditionUsed
Price£ 395
Sale typeTrade
MakeFALKLANDS WAR BRING BACK**Argentine Army Marked Type C Socket Bayonet For FN FAL
Your reference18208