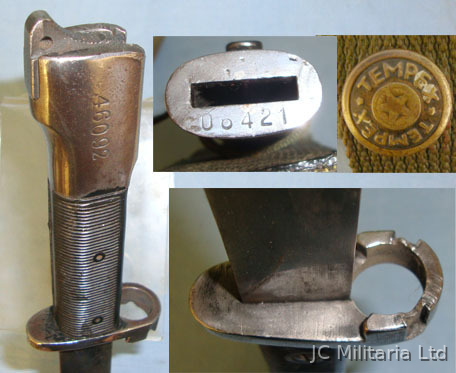 
Production of the Belgian Type A FN FAL bayonet began in 1953. Argentine made bayonets were made with plastic grips and their scabbards were more pointed than the Belgium made model. These bayonets were used by Argentine forces in the Falklands War (See Page 21 of An Illustrated History Of Bayonets by Brayley where an Argentine Type A bayonet (with flash suppressor prongs) captured at the Falklands battle of Goose green is illustrated). This Argentine Type A bayonet is most likely a bring back from the Falklands war. The bayonet is in excellent condition with correct ribbed plastic grips and distinctive locking catch on the pommel. The muzzle ring originally would have had 2 muzzle flash suppressor prongs. The prongs have been contemporarily been removed. It has a 7 ¾” long polished steel blade which has light staining consistent with age and measures 12 ¾” overall. The pommel is numbered 46092. There are no other manufacturer marks on the bayonet. The blackened metal scabbard is the slim Argentine pattern. The scabbard has a frog bar. The throat is numbered ‘06421’. The scabbard is fitted with period webbing frog which has 2 retaining straps with press stud fasteners marked ‘Tempex’ and steel wire belt bar. The rear of the frog has a riveted plastic belt attachment mount (see page 22 of Brayley’s book where an Argentine Tempex frog the same as ours is illustrated). The price includes UK delivery. Sn 18207
£395.00...Read full description
CategoryBlades
SubcategoryBayonets
ConditionUsed
Price£ 395
Sale typeTrade
MakeFALKLANDS WAR BRING BACK**Argentine Type A Knife Bayonet For FN FAL Rifles With
Your reference18207