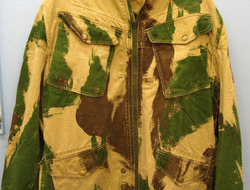 
This is an original, British Camouflaged Airborne troops/ Parachutist's Denison Smock used by British Troops during the troubles in Northern Ireland and The Falklands War. These Denison's were manufactured in the final stages of Denison production during the 1970's and can be identified by the code 8405-99-973 found on labels in the garments. The 8405 prefix is a NATO stores number (see page 159 of the book, Denison by Bruce Wilson). It has elasticated cuffs, tail flap with stud fasteners and full zip. Inside the body has it's original label stamped 'Smock Camouflage 8405-99-973-5163 Size No 3 James Smith & Co Derby A/78/Clo/32124/DC69(2)'. All material and stitching are clean with just some service wear on the collar, (see the insert photograph), which is to be expected. All zips and stud fasteners are present and work perfectly. Price includes UK delivery. Sn 13552
£395.00 ...Read full description
CategoryAccessories
SubcategoryClothing
ConditionUsed
Price£ 395
Sale typeTrade
Manufactured Year1970's
Your reference13552
Recommended UsageCollection item