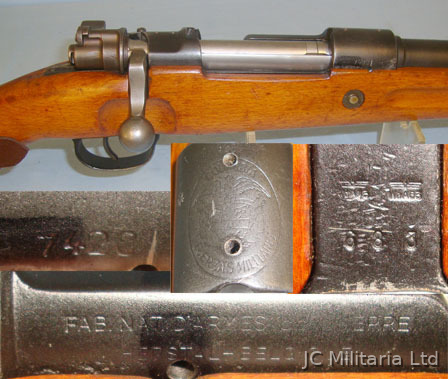 
***This Firearm is deactivated to one of the pre- 2nd May 2017, UK specifications. As such it can only be sold and exported in its present state to customers in NON- EU countries including the Isle of Man and Channel Islands. Customers based in the UK & other EU countries can purchase on our lay-away scheme. The weapon will then be brought up to the EU specification and the relevant certificate obtained prior to the transfer of ownership and delivery. *** This is a Belgian K98 Mauser in 7.62mm NATO calibre. These weapons were produced by FN (Fabrique Nationale) in Belgium for Columbian Government Forces. Its woodwork and metal is all original and undamaged. The underside of the wood shoulder stock has poker work ‘7.62’ (calibre). It is fitted with an adjustable rear sight and shrouded block with blade fore sight. It has a steel butt plate, bayonet bar & its sling swivels are fitted with sling. The top of the breech is stamped with Columbian Government roundel and the left side of the breech stamped with the manufacturer's detail ' FAB NAT ARMES DE GUERRE HERSTAL BELGIQUE'. The rifle has matching numbers on the 7828 on the breech and bolt. The magazine plate is Waffenamt WaA63 (WW2 Nazi manufacturer code for Mauserwerk Oberndorf ) & numbered ‘883’ indicating that this rifle was converted from a Nazi WW2 rifle or made using parts from a Nazi WW2 rifle. Deactivated to UK specification in 2001 the rifle cocks and dry fires crisply. The price includes deactivation certificate & UK delivery. Sn 18196:18
£695.00...Read full description
CategoryRifles
SubcategoryBolt Action
ConditionUsed
Price£ 695
Sale typeTrade
MakeFN. FAB NAT ARMES DE GUERRE HERSTAL BELGIQUE
Calibre7.62 mm
ModelColumbian Military Contract, Belgian FN K98 Mauser Bolt Action 7.62mm NATO Calib
MechanismDeactivated
CertificateNo Licence
Your reference18196:18
Gun StatusDeactivated
Recommended UsageCollection item

In our community section
More about this: How to Zero with Iron Sights