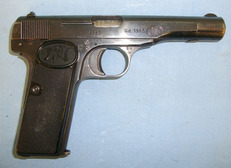 
A Browning Model 1922 7.65mm (.32ACP) semi automatic pistol. This a variant of the Model 1910 and was known variously as the Model 1922 or 1910/22. This was a larger model with a longer barrel, slide extension, and a longer grip frame to accommodate an extra two rounds. This model was aimed at military and police contracts and many examples were produced for various agencies. The FN Model 1910/1922 was initially designed for Yugoslavia. 1910/1922 pistols went on to see extensive service in World War Two, and continued to be manufactured by the Germans after their occupation of Belgium and seizure of the FN factory. This weapon is in very good condition. It measures 7" overall length & has undamaged black vulcanite grips. The grips have the Trade Mark "FN" inside an oval on each side. It retains its original blue finish. It is stamped on the left side "Fabrique Nationale D Armes De guerre Herstal Belgique Browning's Patent Depose". On the right side of the frame near the trigger it is stamped ‘1017’. The barrel, slide, breech and frame are stamped with matching numbers. The breech has Liege ELG mark and calibre detail. The slide is also stamped ‘Gd 1965’ and with FN roundel. It has a safety catch on the left side & military / police lanyard ring at the butt. The magazine is stamped with "FN 7.65". Deactivated to UK / EU specification in 2020 the pistol’s slide, grip safety and trigger move. The price includes UK / EU deactivation certificate and UK delivery. D 1553
£475.00...Read full description
CategoryPistol / Hand Guns
SubcategorySemi Auto
ConditionUsed
Price£ 475
Sale typeTrade
MakeFN
Calibre.32
ModelMilitary & Police Model 1922 7.65mm (.32ACP) Semi Auto Pistol and Magazine. **UK
CertificateNo Licence
Your referenceD 1553
Gun StatusDeactivated
Recommended UsageCollection item