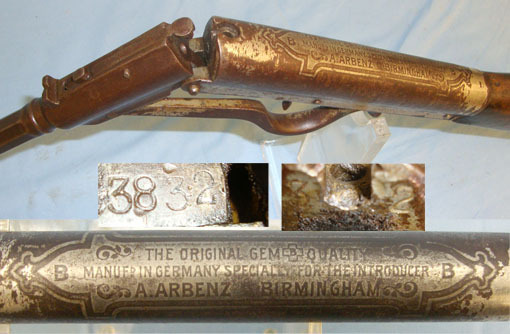 
Gem Style Air rifles were produced from the 1890's to 1920. The patents for Gem Air Rifles were made out in 1894 and adverts for Gems have been seen as late as 1911 (see page 124 of A Collector's Guide To Air Rifles By Hiller). The break action of these models is performed by depression of the thumb operated lever located on top of the breech. This is a nice early example. It has an 18” round steel barrel stepped to octagonal in .177 Calibre. The lightly rifled bore is clean. The frame retains some of its original nickel plating and the top of the frame has an etched panel ‘ The Original Gem Quality Manufd In Germay Specially For The Introducer A. Arbenz Birmingham’(A. Arbenz was a Birmingham based importer / retailer of Gem Air Rifles, see page 127 of Hiller’s book).. The small rifle measures 34” overall. It's metal work and wood stock with steel butt plate is original and undamaged with just surface wear / patina to be expected. It has a blade fore & ‘v’ notch plate rear sight. The barrel block is numbered '3832' and the breech matching ‘32’. The cocking & firing actions work as they should. The price includes UK delivery. Sn 17914.
£275.00Read more
CategoryAir Guns
SubcategoryAir Rifles
ConditionUsed
Price£ 275
Sale typeTrade
MakeGEM
Read more
Manufactured Year1894 To Early 1900's
MechanismBreak Barrel
Calibre.177
Model.177 Calibre, Break Action Air Rifle With Etched Panel ‘Manufactured In Germay S
Your reference17914

More about this
A Guide to Airgun Silencers