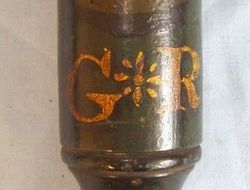 The earliest record of the Tipstaff (Warrant Stick) was in the 14th century. The name derives from the early origins of Policing when Warranted Officers would apprehend a criminal with the help if necessary of a tipped staff. The staff would be made of wood or metal and were not only a means of self defence but the tips of the staffs would bear symbols of their authority. Modern Police Truncheons originated from these Tipstaffs. This is an excellent original Georgian era Tipstaff in a form similar to those used in the reign of King George III. The body is made of a light weight wood with cylindrical body, bulbous stylised crown top and grooved handle. The staff has hand painted decoration featuring the Royal Crown and ‘G*R’ (George Rex) Royal Cypher. The staff also has a stylised monogram which appears to be ‘RP’. The staff measures 10 1/2" overall length and the wood is undamaged. All of the staff’s Gold, Green & Red decoration is vivid. Price for this piece of Policing history includes UK delivery. Sn 11826