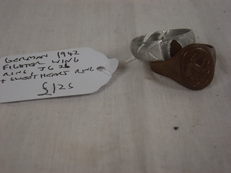 
The main ring is of engraved copper, the sweetheart ring is a form of white metal with an inset heart.

Formed in May 1939, JG 26 spent the Phoney War period guarding Germany's western borders following the German invasion of Poland and the outbreak of World War II. In May and June 1940 it served in the Battle of Belgium and Battle of France. From July 1940 it operated over England in the Battle of Britain under the command of Adolf Galland, future General der Jagdflieger. JG 26 remained in France and Belgium fighting against the RAF Fighter Command Circus offensive in 1941 and 1942, with considerable tactical success. In 1943 it faced the USAAF Eighth Air Force, and along with the rest of the Luftwaffe fighter force, was worn down over Western Europe combating the Combined Bomber Offensive in Defence of the Reich. In 1944, JG 26 resisted the Normandy landings and served as a "tactical" or frontline unit during Operation Market Garden and Battle of the Bulge. It continued to fight up to the unconditional surrender of Wehrmacht forces in Western Europe on 8 May 1945.

Elements of JG 26 served in other theatres. A single staffel (squadron) served in the North African Campaign and Battle of the Mediterranean. One gruppe (group) and a single staffel, fought on the Eastern Front from January to June 1943. A planned move in full to the Soviet Union did not materialise. JG 26 was well known by Allied air forces. The Royal Air Force (RAF) called the Joachim Müncheberg-led II. Gruppe the "Abbeville Boys" after their home base.

Both rings are complete and in good order.

Both rings have an interior diameter of 21mm.

UK postage is £8, international at cost or they can be inspected in our shop.