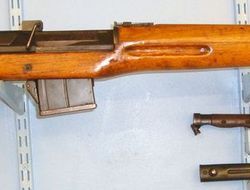 The Hakim Rifle is a gas operated semi-automatic rifle. It was originally designed by Sweden and produced as the AG-42 Ljungman for the Swedish Army. The tooling and design were later sold to Egypt and the Hakim was produced there during the 1950s and 1960s. There were approx 70,000 made in Egypt. The rifle has a 10-round removable box magazine, with latching magazine release catch. It has an unusual cocking action in that the bolt moves forward to open the breech. This is an excellent Old Spec (1994) example with all original wood and metalwork. The rifle is fitted with original webbing sling. It has a 'cutts compensator' type muzzle and shrouded foresight. The left side of the breech is stamped with Arabic text and the right side 'Hakim 7.9mm Made In Egypt' (illustrated). It is complete with an original knife bayonet with double edged 8 1/2" blade and slab wood grips. The bayonet has its original steel scabbard which has no dents. The weapon strips, cocks and dry fires as it should. These rifles were issued to Egyptian Military during the Suez crisis and this is most probably a captured weapon from that conflict. Price includes deactivation certificate & UK delivery. Sn 11505

In our community section
More about this: Treating Rust on an Airgun