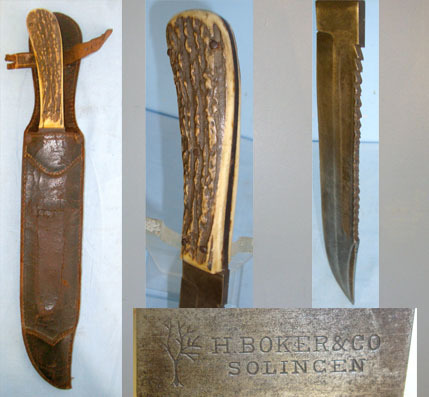 
The Chestnut tree on the Böker logo traces its roots back to the first tiny tool shop in Remscheid, Germany. Böker tools were so successful that they were among the most popular of Germans goods 100 years after the company’s humble beginnings. Due to political strife and an unsettled military state, there was demand for sabers so the Böker brothers, Hermann, Heinrich and Robert, began fabricating them in their shop to meet the call of the market. Realizing the demand for all manner of cutting tools and implements not only in Germany but also on a global scale, Hermann Böker emigrated and founded H. Böker & Co. in New York, while his younger brother Robert pursued his trade in Canada, later founding a branch in Mexico in 1865. This branch is still in operation in its country under the name of Casa Böker. Heinrich went to Solingen, where the German tool industry was quickly growing, to further his enterprise. In 1869, he founded Heinr. Böker & Co. with Hermann Heuser, a prominent specialist in the field of cutting tools. With interest and demand for pocket knives, blades for shaving and scissors, the company wanted to unify its global presence and overcome any existing language barrier. In order to do so, Heinrich felt that the chestnut tree from in front of the Remscheid facility was an easy to remember universal symbol to represent the company’s worldwide reach, along with the arrow symbol. Despite the devastation of World War II, an ad from this time period (1874) survived showing both Böker logos. Since the business relationship between the two family branches was always cordial, Heinrich was able to use the Chestnut tree symbol for his Solingen factory, where, since that time, no Böker product has left the Solingen factory without bearing the trademark tree logo. This is an impressive 15 1/2" long, early Victorian English form saw back Bowie by H.Boker & Co Solingen (early Victorian form bowies were made without finger guards). It has stag horn scales secured by 5 rivets through its full tang one piece heavy blade. The single edged steel Bowie blade with fullers is 10 ½” length. The back of the blade has a 6 ½” long deep cut sharp saw back section near to the hilt. The blade is sharp and has just light staining consistent with age. The ricasso is crisply marked by the maker ‘H.Boker & Co Solingen’ together with Chestnut tree trade mark. It's original brown leather scabbard has an integral belt loop with retaining strap (the strap is absent its buckle which has become detached at some point in its history). Price includes UK delivery. Sn 14878
£695.00 Read more